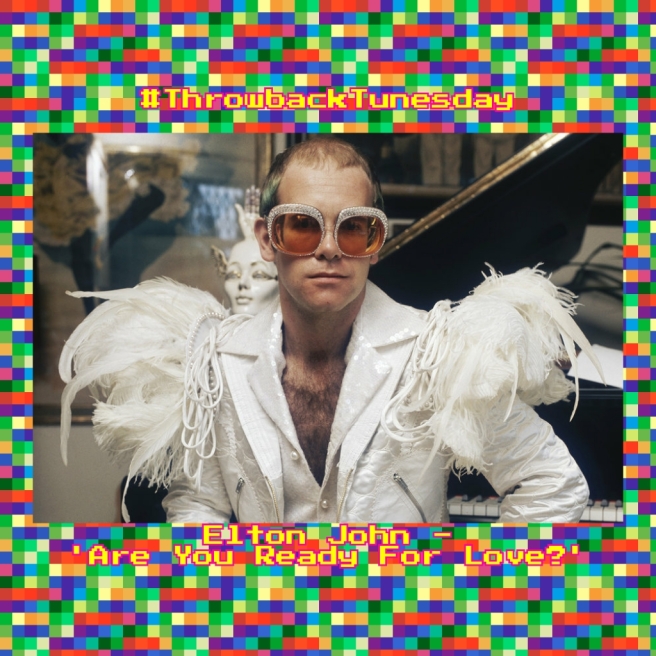 Hope you’re all rested and relaxed from the bank holiday people! Time to ease you into your four day week now with another round of UK chart retro goodness in #ThrowbackTunesday. Let’s see which five classic smash hits from the past twenty five years are on the playlist this week before we get to our featured song…

With just days to go before his three year farewell tour gets underway, it seems fitting that we should be profiling one of the unexpected – and biggest – hits of Sir Elton John’s now five decade long career. To tell the story of it, we have to go back just over 40 years ago to 1977.

Having announced his retirement from performing, John had parted company (albeit temporarily) with his long time songwriting partner Bernie Taupin. The material released in the subsequent two years following – including an album recorded with legendary soul and disco producer Thom Bell that was scrapped halfway through – failed to hit the same commercial and critical heights as legendary albums like ‘Goodbye Yellow Brick Road’ from a few years previously.

One of the few songs to emerge from the aborted Thom Bell sessions was ‘Are You Ready For Love?’, which failed to hit the UK top 40 when it was first released in 1979. It’s underperformance meant copies of the single became gold dust for many DJs and record collectors in the years following.

It was 23 years later when one such DJ, Ashley Beedle (one half of X-Press 2, who had enjoyed a huge #2 hit in 2002 with ‘Lazy’) set about creating a re-edit of the song after his playing of the original went down so well in his DJ sets. Pretty soon, labels were scrambling to release this re-edit as a single alongside the original 1977 recording.

And thanks to its timely use that August in a Sky Sports advert to launch the start of the new Premier League season, that demand grew even more – and the result upon release was Sir Elton’s sixth UK number one hit, smashing straight in at the top fifteen years ago this very week.

And it also continued a unique chart distinction for the British music legend, namely, of having more of his singles hit the top spot on their second time out than they did on the first attempt. Only ‘Don’t Go Breaking My Heart’ with Kiki Dee managed it first time out in 1976. Here’s then, to ‘Are You Ready For Love?’, the lost gem from Elton’s wilderness years that became a rediscovered classic.