New Year’s Day, 2017. Just shy of two weeks ago, the world had just waved goodbye to a year of political unrest, the deaths of numerous icons like David Bowie and Prince, and Ed Balls doing “Gangnam Style” on Strictly.

And as it woke up recovering from the all night hangovers, the social media accounts of singer/songwriter and all round good pop egg Ed Sheeran, which had been dormant since finishing his mammoth world tour in December 2015, were active again, as he shared the following short video.

Two weeks later, and his new singles “Castle on the Hill” and “Shape of You”, which were released in the early hours of last Friday morning, and are his first new material in over a year since the release of the chart slaying “X” album in 2014, are occupying the top 2 of the iTunes chart in no less than 60 countries.

By this time on Friday, he’ll have sold over 200,000 copies of both singles – outselling the rest of the UK top 40 combined – and will be the first artist in UK chart history to debut in the top 2 positions with brand new material (“Shape of You” currently leads the way for number 1).

My first encounter of Ed was, I suspect like most people, back in the summer of 2011. His debut single proper “The A Team” was all over the radio waves. I genuinely thought it was Damien Rice when I first heard it. Only until I saw him perform it acoustically, a wave of ginger tufts and blue eyes and soulful, gravelly tones on the now defunct hangover telly giant T4, did I put two and two together.

That autumn, as I returned to university for my final year, he was about to release his debut album “+”, and my student’s union had booked him to do a gig over that year’s Freshers Fortnight. He also filmed the now legendary “Lego House” video that same night alongside Harry Potter star Rupert Grint. I remember being gutted that the tickets sold out for the gig as quickly as they did, but I also remember feeling like I was witnessing the birth of a superstar. The “+” album subsequently went onto be his first million selling album.

Superstar seems an odd title to give Ed. Not in a glib way, of course. But, largely because the impression I get watching interviews with him, and from speaking to anyone who’s met him, is that he is the least starry superstar there is. This is a man who, when asked what his highlight was of a year in which he’d taken in two million selling chart toppers (“Sing” and “Thinking Out Loud”), a second multi platinum album and awards galore, said that having afternoon tea with Van Morrison was the standout moment.

There is a very honest, unique relatability to what he does, and the music highlights that. Who else would pen an ode to their hometown with such nostalgic warmth and wit as he does on “Castle on the Hill”? Who else delivers such biting cheekiness to his critics but he on “You Need Me, I Don’t Need You”? And who else delivers such brooding emotion as he does on “Bloodstream” or “Small Bump”? 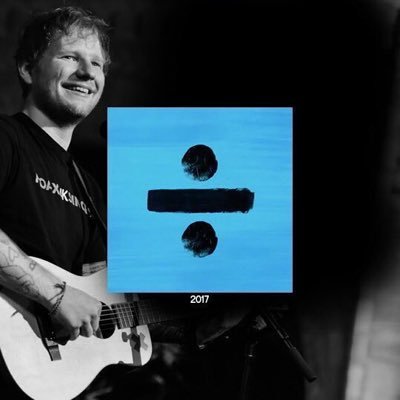 And perhaps more outstanding, is the fact he has achieved all this with just one instrument alone as his backing. His documentary film, “Jumpers For Goalposts”, released in 2015, is a spine tingling must-see for anyone who appreciates good music. Seeing him pack out Wembley Stadium four nights in a row with just him, his guitar and loop pedal (we’ll pretend Elton John wheezing his way through a duet with him didn’t happen) is pretty f***ing amazing.

Doubtless, as he readies the release of his hotly anticipated third album “÷”, on which both his new singles will feature, we’ll continue to hear plenty of that relatability by the bounty. And we’ve also resolved with ourselves that we’ll go see him live this time around – before his career goes even more stratospheric.

Ed Sheeran’s new singles “Castle on the Hill” and “Shape of You” are available to stream and download now via Atlantic. His new album “÷” is out later this spring. Twitter: @edsheeran