There are some new things I’ve started doing since, well, let’s be honest, even before a nationwide lockdown commenced. And owing more than ever to the fact I’ve not seen my youngest nephew in two months, this is one of the ways I can still feel connected with him, through a TV show that both of us love.

Almost a year ago, I wrote a post on here that his go-to show was Peppa Pig, but even though he’s moved on from it now, I’m happy to say that his attention’s now turned to a show all about a whimsical after school club running dog and a whole other menagerie of animal chums. This is Hey Duggee.

Under normal circumstances, on the days when I am home and my sister comes with him in tow to visit his nanny, I usually interrupt whatever I’m doing at 10:30am to stop, with a coffee, and watch Hey Duggee with him, it’s jaunty banjo led theme tune usually accompanied by me doing an amusing hoedown dance to it which he finds funny.

Created by the animation team Studio AKA, and first broadcast in 2016 on CBeebies, the show is jollifully narrated by our blog favourite and host of Pointless, Alexander Armstrong, and has just recently finished its third series, which we’ve been happily binging our way through on iPlayer to make our days seem that bit brighter. 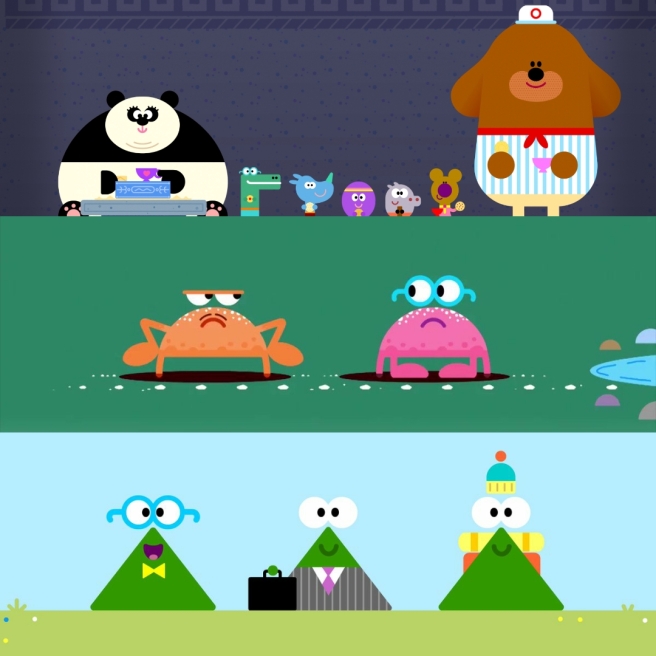 Only communicating through a witty series of ‘Ah-woof’ sounds, Duggee heads up the Squirrel Club, which consists of Norrie (shy and thoughtful mouse), Betty (brainy and authoritative octopus), Roley (loud and brash hippo), Happy (water loving crocodile) and Tag (loveable, imaginative rhino), as Duggee guides them through all manner of adventures, fun and games, from which they earn badges.

Some of it is standard pre-school territory; numbers, shapes, colours. Other times, it’s everything from comedy to elections via mysteries. So like all the best kid’s shows, there’s a wider reaching appeal and humour at work that reckons it up there with The Magic Roundabout for universal future classic appeal, thanks to the assorted supporting cast.

This includes Mr Crab and his long suffering partner Nigel, Chew Chew, the biscuit eating panda (who sounds suspiciously like she was modelled on Adele), an army of frogs who communicate exclusively in Stoppit and Tidyup -esque ‘RIBBIT’ noises (or sassy teenage whining when they’re in tadpole form. Watch ‘The Tadpole Badge’ episode to see what we mean), and Duggee’s placid cat Enid.

Some of the pop cultural references are downright hilarious too. Take the Tadpole Badge episode we mentioned above for example, where three of the former tadpoles turned fully grown frogs declare respective intentions to leave the pond for working in the city, studying mechanical engineering and going on a ‘gap yaaaah’.

Or there’s the Spooky Badge episode, where – only on second viewing – do you realise that the Squirrels, in pursuit of a ghost parading the garden, are dressed up as characters from Scooby Doo, even down to utilising that show’s range of instantly recognisable running sound effects from the Hanna Barbera archive.

But the show’s piece de resistance when it comes to best episodes surely has to be ‘The Stick Badge’. Fans and parents who’ve watched the show will know what I mean. What starts as quite a gentle storyline about Duggee and the squirrels collecting sticks for a camp fire then takes a diversion into, well… this:

If you now have this song in your head between now and next week, I make no apologies. In fact, consider it a good thing. I dare say had the show become popular in the late 90s and not in the 2010s and this new decade that someone somewhere would have released it as a novelty Christmas single. STICKY STICKY STICK STICK.

So to summarise: Hey Duggee is a kid’s show that’s not strictly for kids yet is, and is highly addictive, bright and humorous, yet reassuring. If it brings those five minutes of normality that real life struggles with presenting us at the moment, this could only be a good thing. I dare say Duggee himself would give a hearty ‘Ah-woof!’ to that statement.