It’s Thursday, it’s midday, and time once again to bring you another slice of the UK charts as they looked and sounded twenty whole years ago. This is The Story of Pop: 1999. And this week, another imported dancefloor filler – this time from Italy – that was the second biggest selling single of the year… 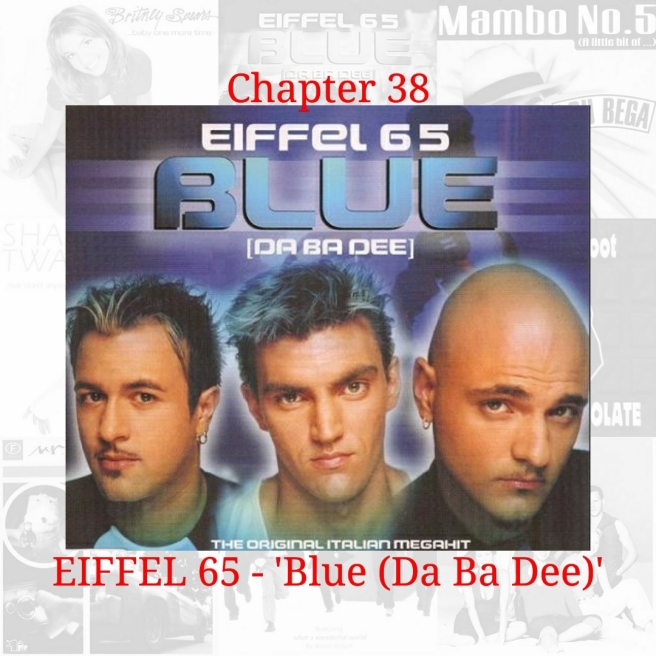 The bustling North Italian city of Turin is home to many things: stunning architecture, a leading football team (Juventus F.C), and Lavazza coffee. And it’s also home to BlissCo, a dance music production house and record label that was founded in 1992 by Massimo Gabutti. One of its other founding members was Gabry Ponte, who joined them as a DJ in 1993. He was still there some five years later, when keyboardist Maurizio Lobina and vocalist and songwriter Jeffrey Jey had joined BlissCo.

Together they became Eiffel 65 – so called because of a mix-up by a clumsy studio hand that had written on their demo CD. One day during sessions in the autumn of 1998, Lobina had come up with a wistful sounding but nonetheless catchy piano hook, which Jey started writing lyrics for, based around someone choosing to live their life through a colour. With a uniquely vocodered effect on the vocals, and a final mix incorporating two separate versions of the track, ‘Blue (Da Ba Dee)’ was born.

When it was first released in Italy in March 1999, the song didn’t initially take off. It was only once it was re-released there that May that it became a huge hit in their home country, before – yep, that old chestnut again – summertime holiday makers caught wind of it and it promptly started topping the charts in France, Germany, Switzerland, Norway and fifteen other countries. In fact, it spent much of that summer in competition with Lou Bega’s ‘Mambo No. 5’ to be the big dancefloor favourite of that time.

And as with that song, it first charted on import sales alone here in Britain, getting as high as #39 two weeks before it’s full release through Warner Music on the Eternal label on 13th September 1999. Once released, ‘Blue (Da Ba Dee)’ thundered to number one in the UK charts, staying there for three weeks as the summer gave way to the autumn, eventually selling just over 1.2 million copies to be Britain’s second biggest selling single of 1999.

As the new millennium dawned, the single also charted in America, and was eventually nominated for a Grammy Award for ‘Best Dance Recording’ in 2001. Contrary to popular belief, ‘Blue’ wasn’t Eiffel 65’s only brush with the UK chart. Their follow-up single, ‘Move Your Body’ was a top 3 hit in February 2000, and they also remixed singles for The Bloodhound Gang and S Club 7 (possibly as a peace offering for the latter, whom they kept off the top with their second single ‘S Club Party’) but their album ‘Europop’ largely failed to have the same success.

They would continue to release, record and tour more music together up until Gabry quit the band in 2005. Jeffrey and Maurizio reunited as a duo in 2010 and still continue to tour and perform to this day. American rapper Flo Rida even found time to sample their global hit ten years after its release in 2009 on his single ‘Sugar’ with Wynter Gordon. But for this week we salute – as it was dubbed on the sleeve of the single – ‘The original Italian megahit’ of 1999 in ‘Blue (Da Ba Dee)’.