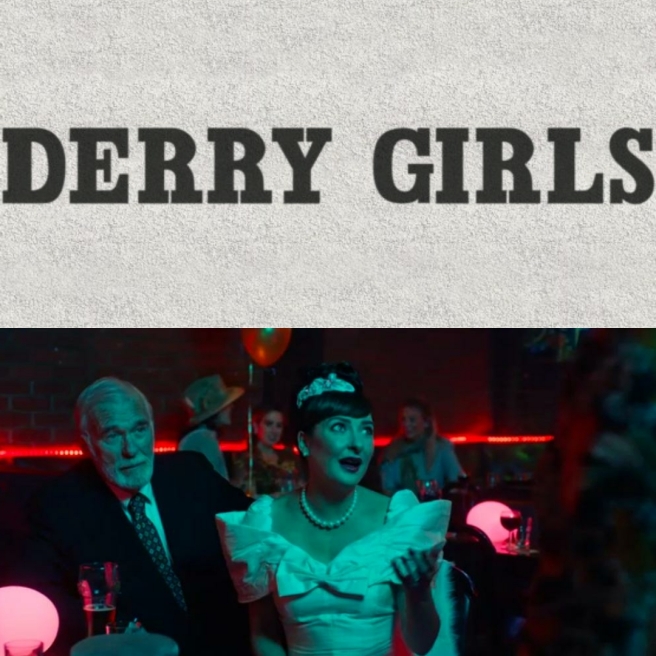 Time once again to bring you the lowdown on this week’s Derry Girls – but before we do, firstly a hearty congratumalations to the girls – and the show’s writer Lisa McGee – as the show has just this week been nominated for a BAFTA for Best Scripted Comedy Show. Fingers crossed you win and all that ladies (and the wee English fella)! And now, on with the show…

We open this week at the Quinns’ parish church to see the unusual sight of Aunt Sarah walking down the aisle looking like a floating angel to the strains of ‘Here Comes The Bride’. We say unusual given there’s been no hint of a romance for her so far this series (apart from that with Fake Bake). Anyway, down the aisle she comes, and then she’s followed about ten seconds later by the actual bride and her father. Awkward…

Aunt Sarah seems totally oblivious to what she’s done until they’re at the reception an hour or so later, when her and Ma Mary are confronted by the mother of the bride, their disapproving Aunt Bridie (who Granda Joe doesn’t exactly mince his words about). Also in tow is her dweeby fiftysomething son, and Erin’s cousin Eamonn (guest star Ardal O’Hanlon of Father Ted fame).

Later that night, with the reception party in full flow, Erin and Orla are relieved when Clare, Michelle and James turn up to give them a break from the familial frostiness (despite Ma Mary saying that only one friend was allowed to be invited. ‘They kind of come as a pack’, Erin replies nervously). Thankfully, a compliment on her hat from James butters up Ma Mary nicely enough to let it pass, and for Michelle to turn on the charm:

This naturally causes Clare to go into full on dweeb mode, and say what Michelle describes as ‘the dickiest thing she’s heard all evening’ that ‘Drugs are for mugs, people’. But before their dispute rumbles on much longer, that well known disco floorfiller, ‘Rock The Boat’ by The Hues Corporation, a quintessential part of every social function or gathering in Ireland during the 90s, comes over the speakers and suddenly there’s more important matters at stake. Exhibit A:

As the Quinns look on admiringly at their bains, the happy scene is broken up swiftly by Aunt Bridie, again with a jittering Eamonn in tow, as she accuses the girls of shoving in to get to the front of doing ‘Rock The Boat’, which just so happens to be Eamonn’s favourite song. Ma Mary tells her quite rightly that she should probably loosen up and that they didn’t mean it, given that they’re in their teens and he’s in his fifties and can probably hold his own ground.

This leads Aunt Bridie off on a tirade at Ma Mary, Aunt Sarah and Granda Joe, stating how disappointed their late mother would be with all of them. And then Ma Mary demonstrates a posession of actual powers we don’t think even she knew she had…

Well, that ended well, didn’t it?

A few days later, ahead of the wake for the now deceased Aunt Bridie, Ma Mary’s practically beside herself and feeling very culpable for having caused her death. Despite the fact she doesn’t believe she can put ‘the curse’ on people. Da Gerry’s attempt to make light of the situation doesn’t exactly help matters here either…

Round at the wake the following evening, Eamonn’s keen to stress to Ma Mary there’s no hard feelings, and likewise the Quinns (or more specifically, Da Gerry) offer an olive branch by volunteering to help with the military style catering for the (mostly aging) mourners. Sister Michael even makes an appearance at the wake, although not out of choice by her own admission, evidenced when she winds up stuck with (who else?) Uncle Colm:

Meanwhile, Erin and the girls are in the living room where Aunt Bridie’s coffin has been laid out for people to come and pay their respects. James is a bit freaked out by the whole concept given he’s a wee English fella and not aware of the custom. Then Michelle arrives with some provisions to liven things up a bit:

It’s only once Clare twigs that they’re ‘funny’ in the fact they’re laced with weed that she goes into full on dweeb mode again. Michelle then states she’d wanted to make hash brownies, alas her ma only had a recipe for scones, so she improvised. Eamonn then comes into the room and swiftly takes what he thinks are just a box of scones off to the kitchen to be prepped, to the absolute horror of the girls and James.

Erin heads off to the kitchen to try and retrieve them, and finds the unusual sight of both a very irate Da Gerry flipping his lid about salad sandwiches not having scallions, and of Granda Joe in a very unusually jovial mood. It’s then that the ball drops when she realises the scones are already circulating and that Granda Joe is as high as a kite, so she and the others quickly begin an effort to try and coax the remaining scones away from the guests, with the intent of flushing the ‘funny scones’ down the loo.

Meanwhile, Ma Mary and Aunt Sarah go to (begrudgingly) pay their respects at the coffin of Aunt Bridie, but quickly realise that the sneaky madam has got away with wearing their late mother’s earrings. Ma Mary then does something that screams ‘Like mother, like daughter’ and steals them, and is swiftly caught red handed by Eamonn, who then promptly says she definitely did have ‘the curse’ and that he only told her she didn’t just so she didn’t get upset.

But their dispute is broken up when they all notice a large dripping coming through the ceiling. Cue a march upstairs to the flooded loo in the upstairs bathroom, where Erin somehow manages to convince all concerned that she had ‘the scoots’ and needed help.

Following the funeral a few days later, with Erin ‘recovered from the scoots’ and the earrings buried six feet under with Aunt Bridie wearing them (which Ma Mary says they’re definitely not going to retrieve, as it would be a very bad idea), Granda Joe announces that he really enjoyed the scones at the wake the other night, and that he’d kept a doggy bag of them for everyone to enjoy…

I think it’s safe to say Erin won’t be looking at scones in quite the same way for a while. A really funny episode this one – and nice to see Ma Mary and Aunt Sarah at the centre of the action in an episode for a change. Roll on the prom next week!