Welcome to another installment of The Story of Pop: 1999, our weekly look back to the UK chart hits of 20 years ago. And it seems quite fitting that this week, with Red Nose Day for Comic Relief just around the corner again next Friday, that we profile one of its former fundraising hits… 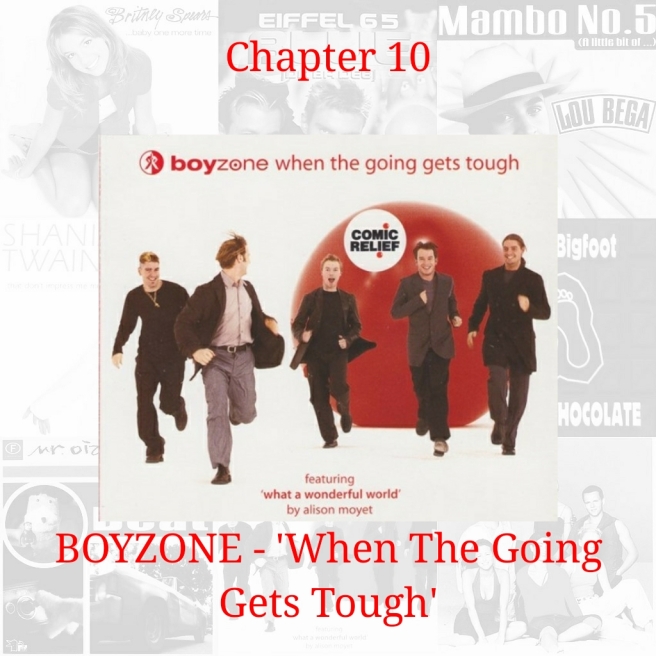 It was unquestionable that the previous twelve months for Boyzone had been their biggest so far. Ireland’s first sons of boyband pop were riding the crest of a wave with their biggest selling single of 1998 – and their career to that point – in the shape of their three week chart topper and million seller ‘No Matter What’, which in turn had also won the first ever Record of the Year prize on the annual televised ITV poll.

Their third album ‘Where We Belong’ had also been another big seller, and in a time where Spice Girls had lost Geri Halliwell and All Saints were constantly in and out of meetings with lawyers, they were a beacon of reliable stability – even with two members becoming a dad and one getting married. And as the official Red Nose Day for Comic Relief 1999 rolled around, it was clear there was only one pop band big enough to deliver that year’s official single for the charity.

‘When The Going Gets Tough’ had initially been a huge chart topper thirteen years previously in 1986 for Billy Ocean, used on the soundtrack to The Jewel of the Nile, the sequel to the 1984 blockbuster Romancing The Stone, starring Danny DeVito and Kathleen Turner. Boyzone’s video for the song saw them hoofing it up with a multitude of red noses, and a range of famous faces and supporters of Comic Relief – including Graham Norton, Davina McCall, Jo Brand, Rowland Rivron and Phill Jupitus amongst others.

They even covered the 1995 fundraising song by Cher, Neneh Cherry and Chrissie Hynde, ‘Love Can Build A Bridge’ as its B-side. Overall, there was little doubting that with their huge popularity and fanbase behind them that Boyzone were on course for their fifth number one single upon its release, and so it proved, beginning the first week of its fortnight’s run at the top on this very week, and raising a stack of cash for good causes in the process. We’ll meet one fifth of Boyzone again much later in this series – but which one? You’ll have to wait and find out…