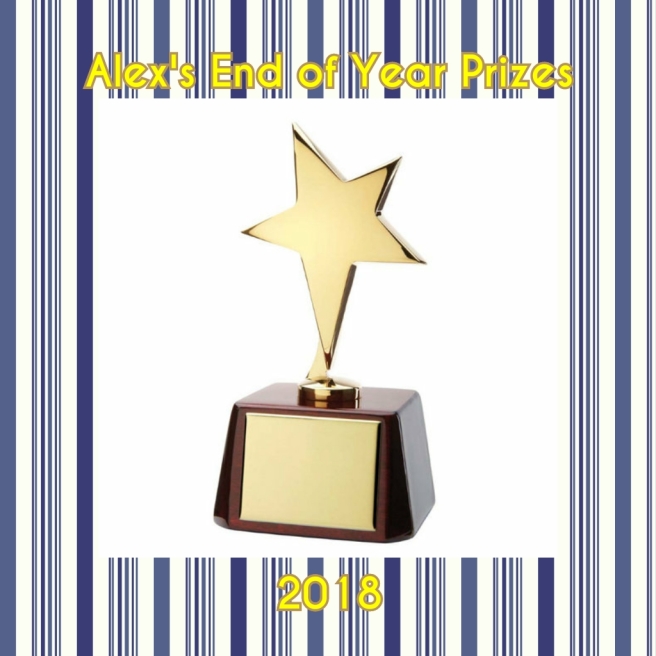 We hope you’ve all had a lovely Christmas so far. As is always tradition on this corner of the internet, today we bring you our most important blog of the year, as we hand out our prizes to those we’ve loved across music, TV, books and film this year. This is quite literally our End of Year Prizes for 2018.

So stick your onesie on, sit back, get yourself a cuppa and a few more leftover roasties/pigs in blankets and/or Celebrations/Quality Street as we start giving out the awards that are making the Oscars look like the county flower show…

SINGER OF THE YEAR: George Ezra

This time last year, it looked as if it was make or break for Hertford’s finest bluesy voiced singer/songwriter, when ‘Don’t Matter Now’, the first single from his hotly anticipated second album had failed to make the top 40.

Twelve months later, and what a turnaround. George Ezra has not only been our favourite singer this year, but he’s also been the biggest selling artist of a year awash with rubbish cast recordings and more Drake bobbins in the charts, his second album ‘Staying At Tamara’s’ not only topping the album listings, but with sales now well over double platinum in the UK.

And his delightfully sunny sounding, Paul Simon referencing single ‘Shotgun‘ was the sound of Britain’s long hot summer, staying at the top for four weeks – making it the very deserving winner of our Single of the Year prize.

ALBUM OF THE YEAR: All Saints – ‘Testament’

It’s not many bands who generally come up with the best long player of their career two decades into it. But Nicole and Natalie Appleton, Shaznay Lewis and Melanie Blatt – that’s All Saints to you and me – have never been most bands.

Working with their long standing collaborators like William Orbit and Karl ‘K-Gee’ Gordon as well as new talent like Hutch and George Moore on some of the most mature, assured and harmonic tracks of their career, including the gorgeous singles ‘Love Lasts Forever’ and ‘After All’, ‘Testament’ is a record that finds one of pop’s most consistent names from the 90s at the peak of their artistic powers in the new decade. Well done ladies.

BAND OF THE YEAR: Rak-Su

We tipped the best thing to come out of Watford since Geri Halliwell’s Union Jack dress for great things a year ago, and boy did Myles, Ashley, Mustafa and Jamaal deliver on their early promise after winning The X Factor. Three inspired hit singles, a best selling book, and even a coveted support slot on Little Mix’s summer arena tour.

And 2019 is shaping up to be another brilliant year for them too – more new music to come, and yet another big tour support in the spring, this time for their new label buddy Olly Murs. Step back, because they really are continuing to be a Pyro Ting.

MAN OF THE YEAR: Gareth Southgate 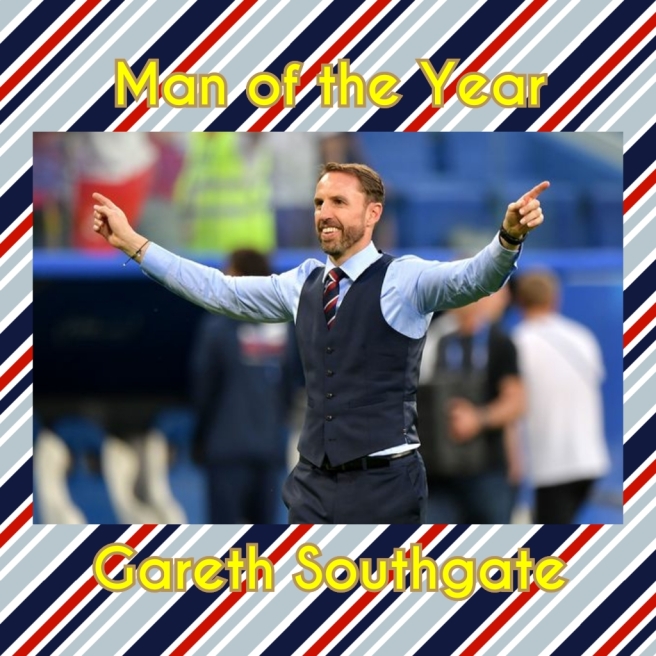 If you’d said to us twelve months ago that we’d have been taking a keen interest in this summer’s World Cup tournament in Russia, we’d have laughed in your face. But even though they were knocked out at the semi finals by Croatia, the performances of the England team at the matches in June and July were undisputedly the best it’s been for years.

And for that, their manager and former England player Gareth Southgate can surely take credit. Not only has he proved he can rock a waistcoat like no other, but his focus and resolve in driving his team’s players made it so inspiring and positive to watch, and in a time of such confusion and division, he bought the whole country together. Now that’s pretty special.

WOMAN OF THE YEAR: Jameela Jamil 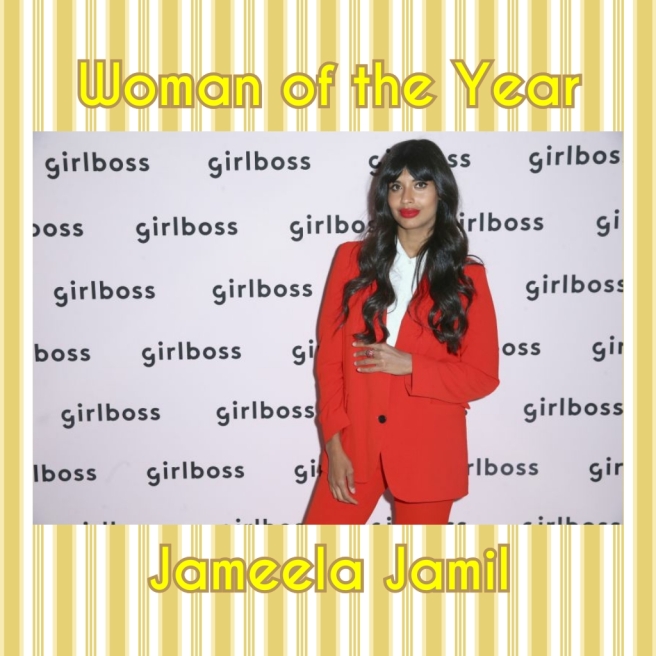 Former host of both T4 and the Official Chart Show on BBC Radio 1 here in Blighty, Jameela Jamil has truly shone this year, not only with her brilliant role as Tahani in hit US sitcom The Good Place – which arrives on our screens on E4 next month – but she has also been one of the few voices of reason in the ever increasingly loud shouting match of image obsessed social media.

Frustrated with unreal depictions of women in the mass media, she set up her ‘I Weigh‘ account on Instagram, instantly attracting thousands of followers, women and men alike, helping others to embrace and be proud of what makes them unique and wonderful beyond the superficiality of appearance. And for that, she surely deserves a damehood – but for now, she is quite deservedly our woman of 2018. 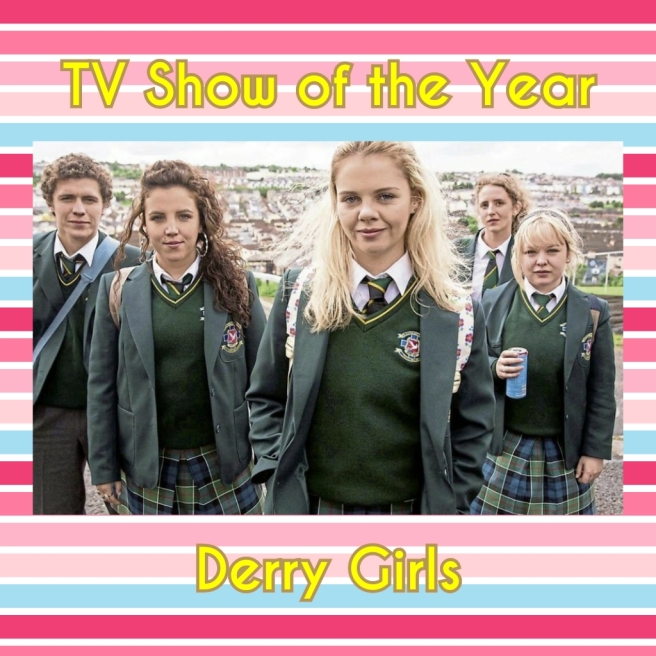 Launched in February, Channel 4’s most successful new sitcom in a decade proved to be hilarious unmissable viewing. Following a bunch of misfit school girls (and the wee English fella) in Derry during the heights of the troubles in the early 90s, Derry Girls put ensemble comedy back on the map and has introduced the phrases ‘Catch yourself on’ and ‘Everyone was raging’ into our daily parlance.

And with the show now airing on Netflix in the States, and a second series already filmed and ready to return to the air in the new year, it seems Erin, Orla, Michelle and Clare and their side splitting misadventures are set to be around on our screens for some time to come yet.

BOOK OF THE YEAR: Adam Henson – ‘A Farmer And His Dog: A Memoir’

ALSO NOMINATED: Miranda Hart – ‘The Girl With The Lost Smile’ / Rev Richard Coles – ‘Bringing In The Sheaves’ / Andrew Flintoff – ‘Do You Know What?’ / Anthony Peardew – ‘The Keeper Of Lost Things’

Not only front and centre at the heart of cosy Sunday evening viewing on the BBC’s Countryfile, its co-presenter and Cotswolds farmer Adam Henson has also turned his hand to several bestselling books, the most recent of which, about his beloved Border Collie, Peg, and of the importance of this hard working breed of our four legged friends to all of us, proved fascinating and heart warming reading for us, and his love of dogs and their importance to our countryside shone through just as well as it does on the box.

COMEDIAN OF THE YEAR: Mo Gilligan

Having developed a strong social media following, Mo Gilligan has truly become one of British comedy’s leading new lights in 2018. Not only has he been a regular on The Big Narstie Show on Channel 4, but as this video shows here, he’s proved he’s equally at home commanding a crowd in his hilarious stand up routines, with his Coupla Cans tour packing out the venues across the UK this year.

ACTOR OF THE YEAR: Siobhan McSweeney

Whilst Derry Girls was our favourite TV show of 2018, it also gives us our favourite actor of the year too. County Cork born Siobhan McSweeney has had a varied and rich career on stage and on screen, but undoubtedly it was her role as the world weary and acerbic head of the convent school, Sister Michael, that bought her to our affections. If anything, her star is set to continue to rise.

On the road across Europe, America, Asia and Australia for pretty much all of 2018, Mullingar’s king of pop and the real breakout solo star from One Direction completed a sold out series of dates in support of his still excellent 2017 debut ‘Flicker’, establishing him as an unmissable live performer in his own right.

He even found time to record a special performance with the RTÉ Concert Orchestra back in April, which has now been turned into a best selling live album to boot. Enjoy your well deserved rest and roll on the next tour and second album next year, Nialler.

FILM OF THE YEAR: Finding Your Feet 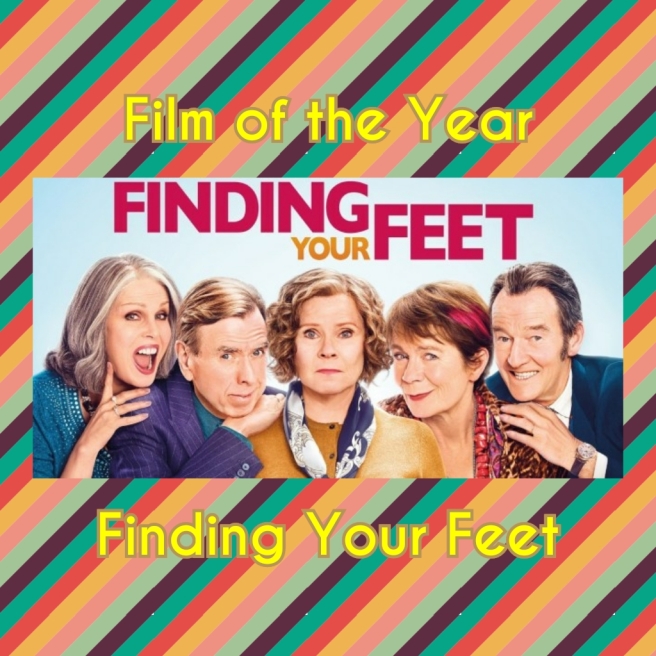 A truly underrated offering from British cinema at the box office this year, Finding Your Feet united the likes of Celia Imrie, Timothy Spall and Joanna Lumley in a sweet, funny and moving film about finding yourself and finding love again – particularly later in life – when you thought it’d been lost. If you loved The Best Exotic Marigold Hotel, then you’re sure to love this.

It was the reunion they said would never happen again in our lifetime. But even with Victoria Beckham deciding to opt out to focus on where her strengths and talent lay in her fashion empire, when Geri Halliwell, Emma Bunton, Melanie C and Mel B announced their UK and Ireland stadium dates and their first tour since 2007 for next summer in November, there was little that could stop them from selling out in minutes, with extra dates added. And as Ginger, Baby, Sporty and Scary get ready to spice up our lives once more, it seems girl power is truly alive and well in the 21st century.

Already recieving the backing of touring partner Ed Sheeran, San Francisco born singer-songwriter Lauv has already made big waves on Spotify charts worldwide with songs like ‘Superhero’ and ‘I Like Me Better’. His minimalist but melodic approach to pop is winning him a slowly growing army of fans, and with support growing here from radio and music press, I’m willing to bet that next year will be when he finally conquers the UK.

On the eve of his 10th anniversary in pop, where he has launched his sixth album of total bops and celebrated his greatest hits with double album ‘You Know I Know’, turned his hand to fashion with his first collection for River Island, and led his local team Coggleshall Town to league victory, it seems only right that Mursy boy wins our Icon Prize this year.

As deprecating as he is likely to be about this honour, it is well deserved, if for nothing else proving that, with all his achievements in the last decade, that British pop music would have been a much less fun place without him if he hadn’t broken through. And boy are we glad he did.

It’s been a tight run thing since we opened the vote to you lot two weeks ago. George Ezra did take an early lead, but after over a hundred votes, and just a margin of 1% seperating them at one point, Kylie Minogue has romped to victory to take home your Reader’s Choice prize for 2018.

This year’s been a very special year for the Aussie pop queen in more ways than one. Not only did she turn 50, but she celebrated her third decade in pop with another number one album, the brilliant Dolly Parton and country pop indebted ‘Golden’, but she wowed audiences with another sold out tour – including a headline slot at Radio 2’s Hyde Park festival in September, which even saw her reunite with her old Neighbours star Jason Donovan.

And as she gears up for another exciting year – including her long awaited debut at next summer’s Glastonbury Festival – here’s to another three decades and many more for the legend that is Ms. Minogue.

And that’s it for another year! All that remains for me to say is congratulations to all our winners, and a big thank you not just to all of you who voted, but also to everyone who’s read along, shared and commented on my blog this year. 2018 has been a brilliant year and I look forward to bringing you more of the same and better in 2019.

Enjoy the rest of your Christmas and New Year holidays, and I shall see you all again in January. Much love always,