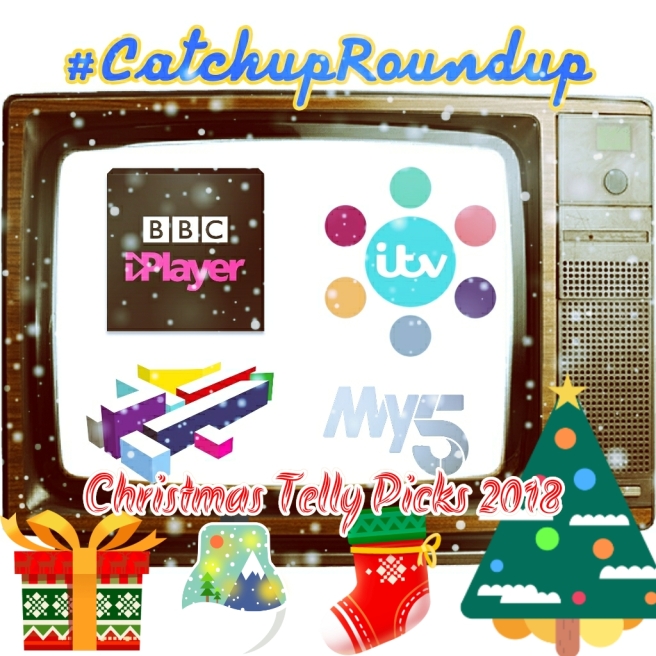 Welcome to the last #CatchupRoundup of the series on the blog – and as you can see from our festive logo, it’s no ordinary #CatchupRoundup. Yes, this is our special bitesize guide – think of it as televisual pigs in blankets – for you to help you find the best things to watch on the box over the Christmas holidays – or catchup with later on.

So go get yourself comfy, make another mulled wine and grab a mince pie as we offer up our choices from the televisual box of delights this Yuletide…

Channel 5 launches its first ever charity telethon tomorrow, as Susan Calman, Gaby Roslin, John Thomson, Gethin Jones and many more will be hosting three hours of live entertainment to help raise money for charities including RSPCA, Blue Cross and The Wildlife Aid Foundation. You can expect some special episodes of The Yorkshire Vet, Ben Fogle’s New Lives In The Wild and Jo Brand’s Kitten Rescue as part of the lineup.

One of our surprise late favourite new shows of the year in the last two months – thanks to an introduction from our mum – has been Channel 4’s warm hearted documentary series, Escape To The Chateau. Now in its fourth series, it follows Northern Irish boy Dick Strawbridge (above left), his London born wife Angel Adoree and their two children (and Angel’s mum and dad in the converted outbuildings) as they bring a chateau in the French countryside back to its former glory in a new lease of life as a wedding venue. This last episode in the current series promises a feast of festive delights, so make sure you cosy up with this one.

Created by award winning children’s author Julia Donaldson (who also produced the classic modern picture book The Gruffalo), Zog is another of her creations, which has now been turned into an animated TV feature, with the voice talents of Tracey Ullman and Lenny Henry. This sweet and funny story follows a young dragon who struggles at school, but makes an unlikely friendship with a princess who decides to help him out. A future family favourite we say.

The ever consummate professional Dermot O’Leary hosts this one hour special paying tribute to one of the most iconic landmarks in British telly, which was closed for redevelopment earlier this year. He’ll talk to and profile some of the stars – and shows – that became favourites of the nation over the last 60 years at the London Studios on the South Bank. You can expect to see the likes of Michael Aspel, Paul O’Grady, Holly Willoughby and Philip Schofield all appear, as well as classic shows like Father Ted, Blind Date and This Morning to all feature.