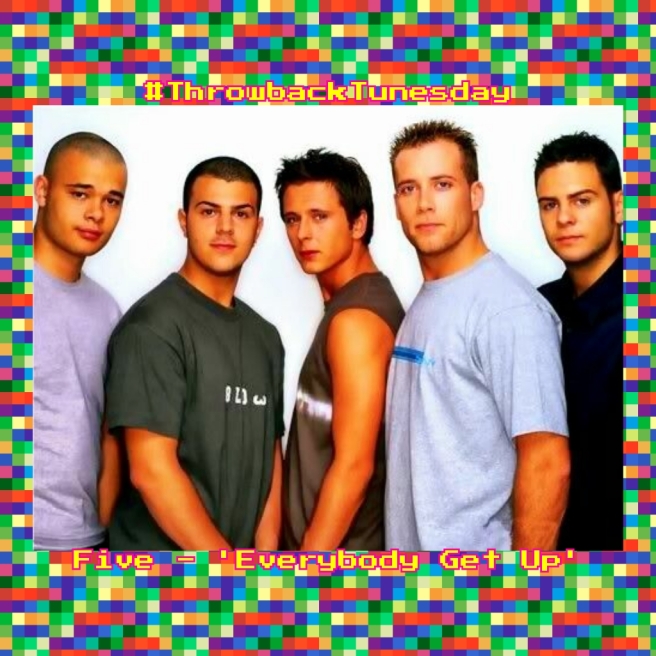 It’s Tuesday, and thus time for us to rewind back to five tunes that were huge UK chart hits in this very week at five points in the last twenty five years. This is #ThrowbackTunesday. And here’s the songs on this week’s playlist before we get to our profiled classic hit this week…

Back in 1997, a tight trousered young upstart at RCA/BMG Records called Simon Cowell was on the lookout. Along with son and father management team Bob and Chris Herbert (who were the original managers of Spice Girls) he was putting together a new boyband with attitude. Not for the angelic, ballad crooning antics of Boyzone or the clean cut cheesiness of 911 were these boys to be.

Chosen from the auditions were Sean Conlon, Jason ‘J’ Brown, Ritchie Neville, Scott Robinson and Richard ‘Abs’ Breen. Quite imaginatively named as Five, they signed a multi million pound record deal, and Simon’s ‘Five bad boys with the power to rock you’ began their ascent to top of the pop tree.

Picking up the coveted Best New Tour Act prize at that year’s Smash Hits Poll Winner’s Party – as high a seal of approval as you could hope for from the feted bible for pop lovers – debut effort ‘Slam Dunk (Da Funk)’ gave them their first top 10 single that December.

Eight months later, and having stormed the top 5 with ‘When The Lights Go Out’ (which was also a top 10 in America) and ‘Got The Feelin’, on this week 20 years ago they scored their biggest hit to that point, sampling Joan Jett and the Blockheads’ ‘I Love Rock ‘N Roll’ for their grittier rap-pop hybrid ‘Everybody Get Up’. Storming in at #2 twenty years ago this very week, it immediately established them as the cool pop currency of the playground.

Even bigger success – including three number ones – was to follow in the next three years, but for now, let’s raise a toast to Five. The bad boys of 90s pop who bought a little cheeky rebellion to the charts, and to boybands.