It’s another televisual #BlastfromthePast we’re offering up for you this week, and one that requires us to set the way back machine to 22 years ago. In a time before Homes Under The Hammer and Grand Designs, came a show that offered up DIY, home improvements – and a hefty amount of MDF and tie-dying – to millions.

Launching on BBC Two in September 1996 before moving to BBC One for its third series in 1998, Changing Rooms was from Bazal/Endemol, the TV production firm who’d already huge success with the daytime favourite Ready Steady Cook, the cookery game show hosted by national treasure (and future partner in giggling to Phillip Schofield on This Morning) Fern Britton, which proved to be such a hit.

Such a hit in fact, that they wondered if the idea of a rapid moving, 30 minute show for the faster moving 90s about DIY could work. And work it certainly did (most of the time, anyway. You’ll see what I mean).

Hosted by “smiley smiley” (and eternally pregnant) Carol Smillie, the concept of each episode of Changing Rooms was simple. Two teams of couples or partners – often neighbours – would swap houses. Their task? To make over a nominated room in each other’s houses with a budget of just £500 to do so – with help and guidance from one of the show’s team of interior designers – and to get it all turned around in two days.

Among the team of interior designers on the show were the dandy, large cuffed and foppish Laurence Llewelyn-Bowen, the slightly more down to earth Graham Wynne, the flamboyant Anna Ryder-Richardson, and the eternally shrill Linda Barker (whose catchphrase almost always seemed to be, when pushing for a design idea against one of the team’s will, “I think it works really really well!”) 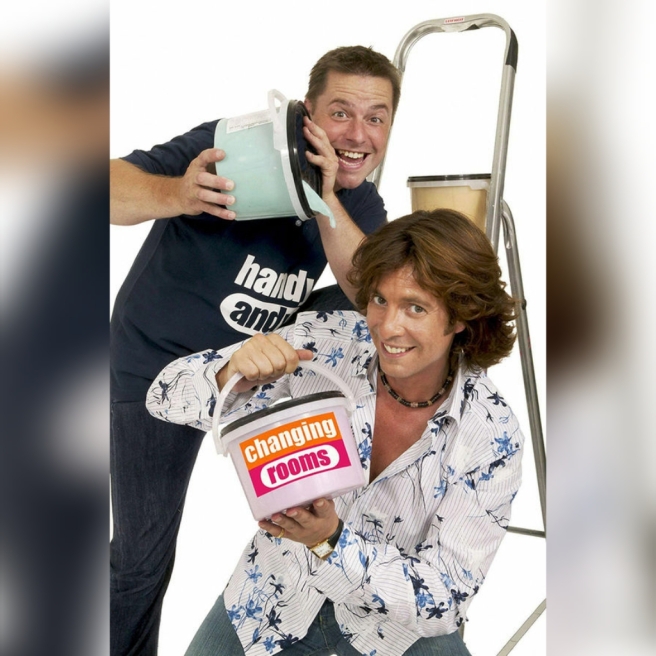 And not forgetting of course, the ever present, sing-song Cockney “Handy” Andy Kane. Undoubtedly a fan favourite of the show (not least because of his world weary, salt of the earth approach against the outlandishness of the designers), he was the show’s handyman who was tasked with sanding, sawing, cutting and trimming everything the designers asked of him in the tight turn around required, from window shutters to coffee tables.

Part of the show’s alluring charm was never knowing quite how the finished rooms would turn out until the very end – or indeed, what the respective teams would make of them when they switched back to their normal houses. Particularly as some of the designers on the show were notorious for letting their wild imaginations run away with them.

This was especially true of one episode from 2000 (clip of which is above), when Linda Barker and her team that week were making over their neighbour’s front room of their Wandsworth flat. Said neighbour had a priceless collection of antique teapots, which, for some bizarre reason, even despite protest from the team, Linda elected to put on a suspended hanging shelf. Needless to say, you can probably guess what happened next. It became nothing short of TV gold.

It was also true of a couple of episodes where Laurence Llewelyn-Bowen and Anna Ryder-Richardson and their teams made over some bedrooms. Laurence, as you can see from the video below, was looking for “Louis XVIII chic” with his barely dressed cherubs and Renaissance frames. The bedroom’s owners however, weren’t so on board with it.

And the clip is sadly unfindable on YouTube, but Anna famously made over one young Essex couple’s bedroom (who had children, we hasten to add) with framed kinky lingerie only seen in dodgy late night shops, and red velour drapes. Their (understandably angry) response? “It looks like a tart’s boudoir!”

But on the occasions when the designers got it right, then on the opposite end of the scale, it was heart warming to watch. In it’s time on air, Changing Rooms made over 100 episodes, and even did a crossover special in 2000 with its sister gardening show, Ground Force.

Carol left the show in 2002, leaving Laurence to take the baton as host for two more series, before it packed up the bench saw and paint rollers for good in 2004. Evidence that it had broken new ground emerged with the likes of shows like Home Front and 60 Minute Makeover springing up in the years following its launch.

Here’s then to this week’s #BlastfromthePast, Changing Rooms. The show that opened our eyes to the wacky – and sometimes wonderful – possibilities of home improvement and living.

What are your memories of this week’s #BlastfromthePast? Tweet me now @ThePensmith10 using the hashtag #BlastfromthePast – or leave your comments below – and I may feature some of them in a future blog!