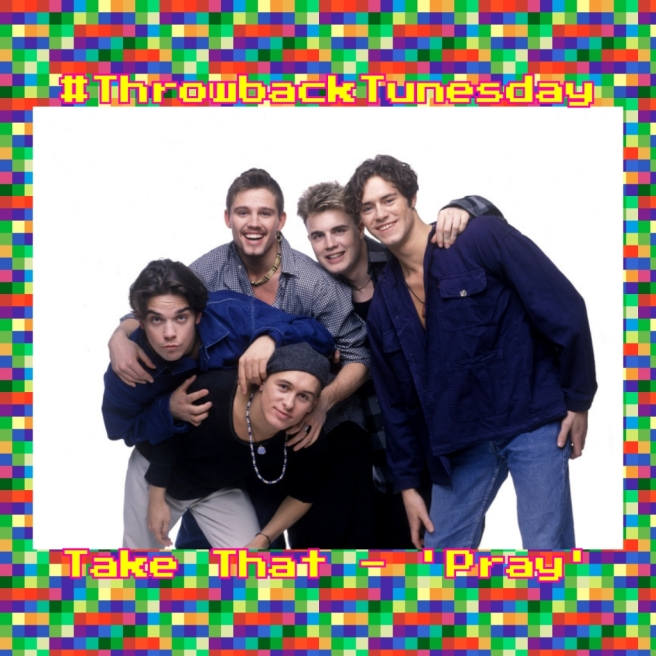 Happy Tuesday one and all! Time for your weekly journey in the musical time machine we call #ThrowbackTunesday. You know the drill. Five acts. Five UK chart storming hits from this exact week in the last 25 years. One playlist. One profiled favourite. It really is that simple.

With a career now spanning nearly 30 years, it’s hard to imagine a time where most thought that Take That didn’t work. But believe it or not, that was indeed the case when, clad in leather codpieces and cycling shorts, Manchester’s fab five for the 90s released their first handful of singles to very modest chart positions.

It was the summer of 1992 when, as their popularity grew from an almost perennial circuit on a schools and clubs tour, that their luck started to change, when their cover of The Tavares’ “It Only Takes A Minute” gave them their first UK top 10 hit, reaching #7.

More top 10 hits for Gary, Mark, Jason, Howard – and not forgetting Robbie Williams – followed, as did a string of awards and teen mag covers. Take That mania had landed. And until 25 years ago this week, it was only their last single off their debut album “Take That & Party” that had come agonisingly close to the top spot (“Why Can’t I Wake Up With You?” stalled at #2).

With the release of their hotly anticipated second album, they were about to be on the crest of a wave, and needed a lead single to match this. Enter “Pray”, a track Gary Barlow had started writing whilst the band were on tour in Japan, which he stated originally had more of a Talking Heads feel to it.

With an irresistible, bright and bold new jack swing vibe, and a rousing, gospel-esque chorus – not to mention an eye catching video filmed in Mexico that, for their legion of female fans, defined the meaning of the ‘fan service’ trope – in the circumstances it was only destined to go one way.

“Pray” finally became Take That’s first of twelve UK number one singles to date upon its release on 5th July 1993, staying there for four weeks, and starting a run of four consecutive number ones – a first for a boyband in UK chart history. And even now, it’s one of their classics that has stood the test of time.