One of pop’s biggest stories of last year was the majestic return of Steps to celebrate their 20th anniversary since the release of debut single ‘5-6-7-8’. Like all the best ‘Phoenix from the flames’ moments in pop, it was one of those returns where they came back bigger and better than before, and put many others to shame. We gave them three of our End of Year Prizes on this here blog last year, for God’s sake. We don’t just do that for anybody.

And now, their Steptacular return (ah, good one us) has been capped off in fine style this month, with the long awaited release of their live album and DVD package of the sold out ‘Party on the Dancefloor’ arena tour they completed last autumn in support of their (still brilliant) comeback album ‘Tears on the Dancefloor‘.

Filmed at Wembley’s SSE Arena in London, the show kicks off with a bang from it’s dramatic opener and their first hit single in 16 years, ‘Scared of the Dark’, slotting nicely into their old classics like ‘Deeper Shade of Blue’, ‘Chain Reaction’ and ‘Stomp’ (complete with Daft Punk style dancers in mirrorball helmets). Props seriously have to be given to Steve Anderson, their musical director, for bringing these nearly two decade old hits to a new lease of life on their first tour in five years. 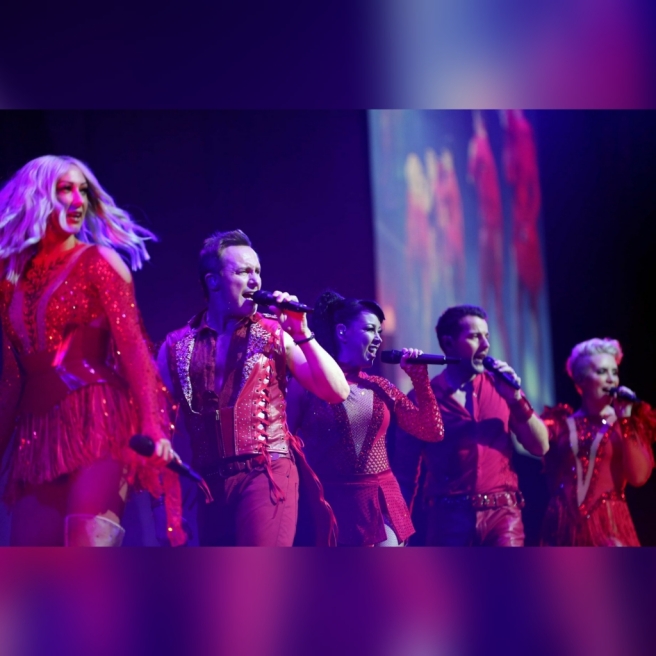 Tracks from the new album such as ‘Happy’ (which we have to say, Lisa Scott-Lee in particular sounded great on) and ‘No More Tears on the Dancefloor’ (mashed up with the old disco classic ‘Enough Is Enough’) also sound and look like they could be future live favourites.

There’s a genuinely sweet moment in the crowd interaction on here, when they mention about their families being in the audience and how they’ve seen clips their original, older fans have posted online of their kids doing the group’s trademark dance routines. This is especially endearing when their own kids come on stage (but not Lee Latchford-Evans’ dog sadly) for a stripped back version of ‘It’s The Way You Make Me Feel’, which vocally they all sounded amazing on and reminds you of just how timeless some of their singles have remained.

In fact, the more simpler rearrangements of that song and ‘When I Said Goodbye’ (a song that arguably holds deeper poignancy now with their history) all point to an avenue Steps would be wise to pursue in the future – chiefly, that of a reworkings style album, a la ‘The Abbey Road Sessions’ that Kylie Minogue released in 2012.

Back in the present though, and the rest of the show is one huge celebration of all they’ve achieved to date, with hit after hit, and huge production after another. The highlight for me was certainly their performance of ‘Neon Blue’, so wonderfully staged, and euphoric feeling, particularly when Faye Tozer sings the line “Come as you are, cause you’re great / And you don’t need to change a thing”. It is truly one of those magical pop moments and songs that encompasses the spirit of what they’ve always been about.

By the time the show finishes on a rip roaring, confetti cannon strewn finale of ‘One For Sorrow’ and (what else?) ‘Tragedy’ (complete with an homage to the latter’s wedding themed video), you’re left in no doubt about two things.

Firstly, what a tonic it is to see Steps back on stage – and how right it is for them be performing new material. And secondly, the fact that where pop returns are concerned now, they are now up there with Take That in the gold standard of how to do it properly. Long may they continue counting us in.

The “Party on the Dancefloor: Live at the SSE Arena Wembley” DVD and live album is available now via Live Right Now/Steps Music. Twitter: @OfficialSteps