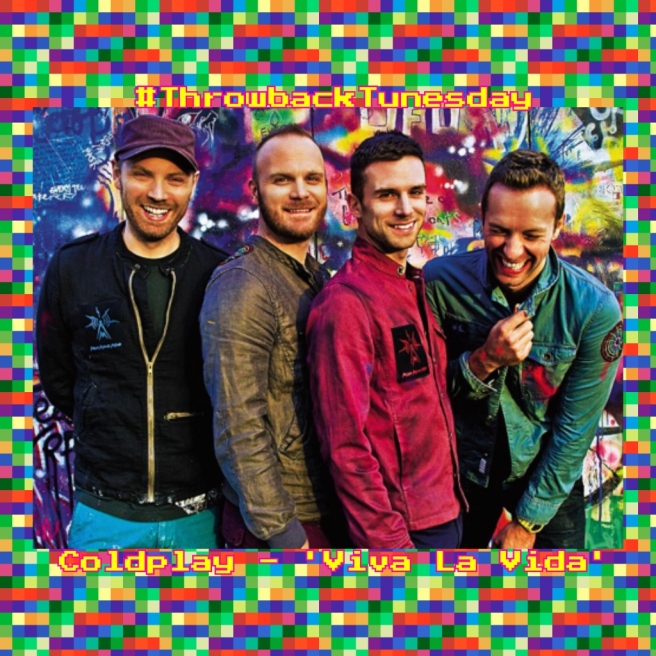 It’s time once again for our flashback to five huge UK chart hits of the last 25 years from this exact week with #ThrowbackTunesday. So as always, let’s see who’s on this week’s playlist before we get to our featured song…

In the summer of 2008, the band who were by all accounts the biggest British rock act of the century – Coldplay – couldn’t put a foot wrong where their album success was concerned. Since their debut with ‘Parachutes’ in 2000, every single one of their albums had topped the chart and sold by the truckload – and around the globe too.

But where their singles success in the UK was concerned, they seemed to be the eternal bridesmaids. ‘In My Place’, the first single from their second album ‘A Rush Of Blood To The Head’ had to be content with a #2 debut in August 2002, behind Pop Idol favourite Darius with ‘Colourblind’.

Three years later, in May 2005, when ‘Speed of Sound’ was first out the traps from ‘X&Y’, that too had to make do with a #2 peak behind – of all things – an animated, annoying and oddly endowed frog from a ringtone. It was an odd and – no doubt for Chris Martin and pals – frustrating position they found themselves in.

With their fourth album, it had been by all means a low key affair to its launch. ‘Violet Hill’ had gone first as the lead single a month previously, and reached #8 (probably no doubt, due to the fact they made it available to download free from their website first, where two million took them up on the offer).

But their eight year long patience was finally rewarded, when upon release of the second single and title track from the album, ‘Viva La Vida’, not only gave them their first ever UK number one single, but also topped the Billboard charts in the States.

They’ve had other chart toppers since, but few of them come close to the majesty of ‘Viva La Vida’. Even 10 years on, it’s the sound of a band arriving majestically on top, Jerusalem bells, Roman cavalry choirs and all.