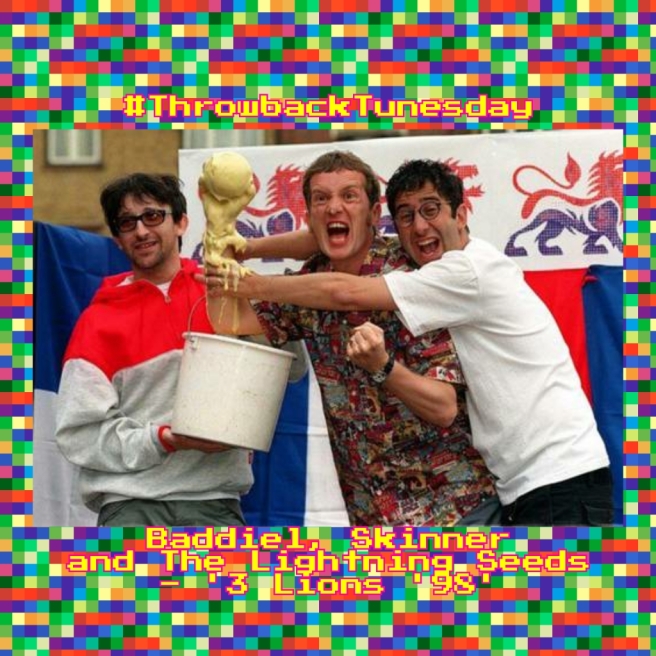 Morning all! It’s time to kick off Tuesday once again, as always, with #ThrowbackTunesday, our weekly musical trip back in time to five UK chart hits of the past from this very week in the last 25 years. Before we get to this week’s featured song, let’s see who occupies the playlist this week…

You can always tell when the summer months have started in an even numbered year here in the UK. Usually because half the population are suddenly donning red and white, as the England football team gear up to participate in another tournament of the European Championships, or in the case of this year and 20 years ago this week, the FIFA World Cup.

Once upon a time, football and the pop charts weren’t necessarily natural bedfellows. True, the England Squad had topped the chart in 1970 with ‘Back Home’, but it was only when New Order topped the chart a whole 20 years later in 1990 with ‘World In Motion’ that it became commonplace for England to be sent off to the matches with an anthem of sorts ringing in their ears.

Two years previously, when the UK paid host to that year’s Euro 96 tournament, it was very much happening when Britain was experiencing a cultural zeitgeist with the boom of Britpop and lad culture. And two public figures who were at the epicentre of this phenomenon were comedians David Baddiel and Frank Skinner. Their ‘Fantasy Football’ series on ITV was brilliant viewing, even if you didn’t follow or understand football. Few who watched it can forget the notorious episode with Brigitte Nielsen, for instance.

Teaming up with one of the leading Britpop bands The Lightning Seeds (themselves no strangers to musical association with the beautiful game, as their hit ‘Life Of Riley’ was often used as bedding music on Match of the Day), the original ‘Three Lions’, with it’s rousing, folk-like chorus chant of ‘It’s coming home, it’s coming home / It’s coming – football’s coming home’ was the official England single for 1996, topping the chart for two weeks and being one of the year’s biggest sellers – even if a missed penalty by Gareth Southgate ensured England were knocked out at the Euro 96 semi-final at Wembley Stadium.

Fast forward two years, and England were trying again at the World Cup ’98, this time in France. I was 9 years old when this happened, and as someone who hasn’t really had a great love of football (feet of blame of which must lay at that of my primary school teacher in Year 3, whose immense tool-ery both towards me and on the game generally put 7 year old me off it for much of the 22 years hence), I do remember being caught up in the mania myself for a change.

This included, but was not limited to, writing and drawing a small piece about David Beckham for a class display about the England team, collecting the Panini stickers for the official World Cup sticker album given away for free at Sainsbury’s, and also buying one of the multitude of World Cup related single releases that stormed the UK charts that June.

The actual official single that year – ‘How Does It Feel (To Be On Top Of The World)‘ by England United – a bizarre supergroup consisting of Space, Echo and the Bunnymen, Ocean Colour Scene and the Spice Girls (pre-Geri leaving) had gone first, but had largely underperformed, only reaching #9. It was overshadowed in the most part by many of the other tie-in releases.

Blur’s Alex James, Damien Hirst and comedian Keith Allen had also released the ‘unofficial’ anthem as Fat Les with ‘Vindaloo‘, which was shifting 100,000 copies a week despite only reaching a #2 peak. Not to mention releases from Dario G, Jean-Michel Jarre and Apollo 440 and, er, Ricky Martin, and the UK charts had officially gone World Cup crazy.

And then, into the richness of all this, came the returning ‘Three Lions’, now titled ‘3 Lions ’98’. With updated lyrics recounting ‘Tears for heroes dressed in gray / No plans for final day’ and ‘No more years of hurt / No more need for dreaming’, it passed from England football song into something of pop legend status. It was set to be a four weeker until England were knocked out once again, this time by Argentina on penalties.

The new version rocketed to number one for a three week run to add to the two the original had achieved in 1996 – combined sales of the two releases now enough to make it a million seller. And whilst 30 years of hurt has now pushed onto become 50 for England instead, there’s no disputing that ‘Three Lions’ is one of the greatest musical legacies that the beautiful game has given us.