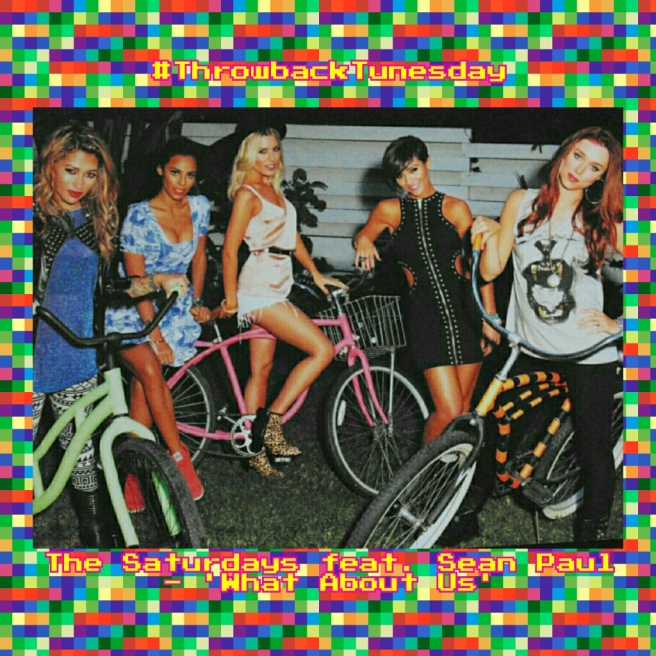 Fresh from an unprecedented week’s break, it’s time once again for #ThrowbackTunesday – five songs, five huge UK chart hits from five points in the last 25 years on this exact week. Before we get to this week’s selection, let’s see who we’ve got on this week’s playlist…

There are some major league popstars for whom it can take a while to reach the level of success that’s generally expected of them. But when they do, oh is it ever a more joyful thing to witness. Just ask one of our all time girl group faves The Saturdays, who, five years ago to the week this week, finally achieved the one thing that had, to this point, eluded them.

In June 2012, now four albums and eleven UK top 10 singles into their career, Frankie, Mollie, Una, Vanessa and Rochelle had struck a deal with the E! cable television network in the States for a ten part reality show documenting their attempts to make it in America.

Whilst only a one season wonder, Chasing the Saturdays was a turning point for the girls in more ways than one. Not only did it prove to be a ratings hit back home in Blighty, but it ultimately got their foot through the door to recording some of the tracks on their fifth album – and none was a bigger deal than ‘What About Us’.

This EDM cod-reggae blast of sunshine pop with a suitably epic chorus came backed with a guest feature from none other than king of the dancehall Sean Paul, and in an otherwise grey and cold early British spring, was like the hint of summer we were all craving.

Originally leaked as far back as October the previous year, when they premièred it at notorious celeb blogger Perez Hilton’s MTV VMAs after party, it wasn’t until their usual round of TV performances and quite healthy airplay – the best of their career, in fact – began to pick up that it caught people’s attention.

As it’s UK release date arrived, it did the obligatory climb up the iTunes chart – something that even as a hardcore Team Sats fan I always found nerve-wracking, largely because in the case of several of their previous singles (hello to you, ‘Missing You’ and ‘Just Can’t Get Enough’) they’d always been midweek number one, but then finished the week at number three behind Flo Rida/Chipmunk/delete as applicable.

But as the week went on, something unheard of happened. It stayed firmly lodged at the top of the midweeks and iTunes chart, even in the face of stiff competition from Justin Timberlake and One Direction, then having just released that year’s Comic Relief single. By the time the following Sunday arrived for ‘What About Us’ to make it’s chart debut, it had been the longest week in the history of weeks to be a fan of The Saturdays!

So had they finally done it and got their first ever UK number one? Well, as the adorable video of their reaction to the news live on Radio 1’s Official Chart Show with Jameela Jamil dressed in a chicken onesie proves, yes they did – and in style too.

Outselling their competitors by 40,000 copies, their first week sales for ‘What About Us’ of 114,000 made it one of the fastest selling number one singles of 2013, and it remains their biggest single to date. As Vanessa quite rightly sang in the song’s opening lyrics, it had been a long time coming – but boy was it worth the wait.