I’ve spoken many a time before on the blog about life after hugely successful pop bands – solo efforts from former members of girl groups in particular being my Mastermind specialist subject. And particularly, my love of those albums or singles from such artists that weren’t broadly commercial or mainstream, but for whatever reason I couldn’t get enough of, even if the general music consuming public at large was indifferent to them. ‘Everything’s Eventual’, the debut and only album from All Saints’ Canadian sisters Nicole and Natalie Appleton, released under their collective duo name of Appleton exactly a decade and a half ago today, is one such record.

The story of Appleton begins where All Saints imploded quite dramatically, in January 2001. Although they had just seen off 2000, arguably their biggest year of success to date – two back to back UK chart toppers with the glorious, William Orbit helmed ‘Pure Shores‘ and ‘Black Coffee‘, and a chart topping second album ‘Saints & Sinners’ – in fairness, the writing had been on the wall for some time. 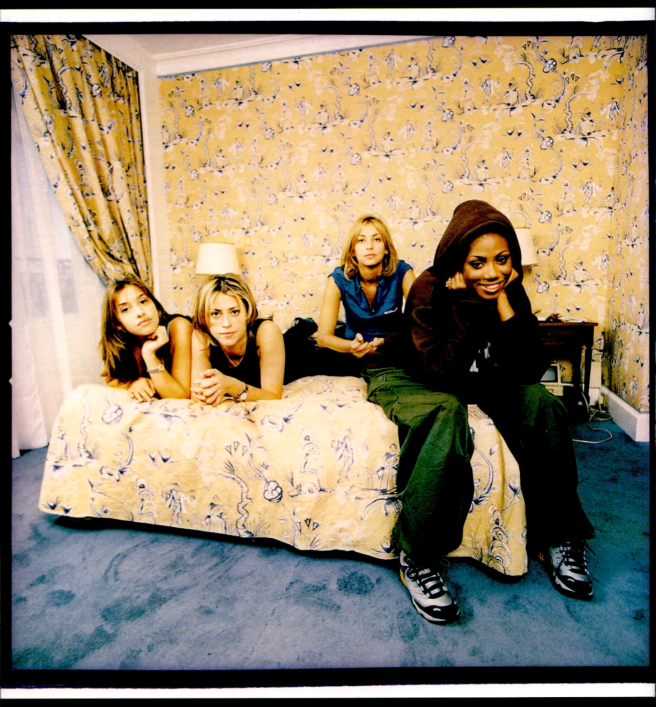 All the girls have openly admitted in the years since that they were ill prepared for the mega success that the likes of million selling ‘Never Ever‘ bought them, and the pressures of manipulative record company bosses and intense schedules, combined with, also by their own admission, their inability to mix business with their friendships meant that, after four years of success, they were a band of two halves by the end of it all: Natalie and Nicole in one corner, and Shaznay Lewis and Melanie Blatt in another.

Tabloid tales of them taking seperate cars, dressing rooms, and hotels proved to be not wide of the mark. Nor indeed, did one almighty scrap over who was wearing a jacket for a particular performance that ultimately was the catalyst for both Nat and Nic to hand in their notices and thus put a halt on one of the biggest girl groups of the late 90s and early 00s.

As a huge fan of All Saints, then in my early teens, I was unsure what to make of it all. Looking at it then, and even now, the reasons behind it all seemed quite trivial and a waste of the huge (and rightly deserved) success they had been enjoying. But even when this success was going on, it was hard not to see why Nat and Nic ended up calling it quits.

At the time of their first run of success, the gossip pages of the tabloids, and the fledgling Heat and Now magazines were quick to adopt them as their new darlings, often picturing them partying and out having a good time in trendy London nightspots like The Met Bar, and often on the arm of famous partners ranging from Robbie Williams to Jamie Theakston. Nothing members of girl groups hadn’t already done then or in the years since (hello to you, all of Bananarama in the 80s, and Girls Aloud’s Sarah Harding and The Saturdays’ Vanessa White in the 00s).

But the press were then just as quick to spit them back out and draw them over hot coals for those very same reasons. One magazine – and I’ve a feeling it may have been Heat – declared them ‘the most hated women in Britain’ in one headline. What their crimes were for having this title, besides doing the same thing many young women in their twenties up and down the UK were doing at the time on a Friday night or weekend, is beyond me. But this, coupled with quite a minimal presence on All Saints’ releases set up their ‘roles’ as being party loving airheads and little else. No wonder then, that they ended up feeling as frustrated as they did.

Eighteen months elapsed following All Saints’ split before Nat and Nic reappeared in public view again. In that time, they got married (Natalie to The Prodigy’s Liam Howlett) and had kids (Nicole had a son, Gene, with Oasis’ Liam Gallagher, whom she married and then later divorced). And also in that time, all of the Spice Girls had launched solo careers to varying degrees of success and longevity. And so too, did various members of the pop groups that had enjoyed success in the wake of the Spice Girls, and which had now gone the way of all flesh.

A quick glance at any of the weekly UK singles charts from 2001 onwards is, you will see, rarely without a top 10 solo release by everyone you can think of, from Five’s cheeky chappy Enfield via Jamaica rap man Abs, to Steps’ own duo renegades H & Claire. All were a bit surprised then, having newly signed to Polydor, that Appleton were the first to launch post-All Saints material in September 2002 (although Melanie Blatt had guest vocalled on ‘Twentyfourseven‘, a #6 hit a whole year previously for garage pioneers Artful Dodger).

Kicking things off as their first single, ‘Fantasy’, was a ballsy, funky electro pop rock statement of intent, sweaty rock club promo video and all, and penned from the hand of little known producer Gareth Young aka Riff Raff. Combining the ear for harmonies that they had more of an integral part of their former band than many gave them credit for, with an epic, soaring chorus tailor made for crowd surfing, the result was an instant UK #2 smash.

It’s release was scheduled to be followed by the debut album they’d quietly been working away on and writing or co-writing with a variety of talent, from Madonna cohort Marius De Vries, to Sugababes and Kylie hit writer Craigie Dodds. It was, at that time, titled ‘Aloud’. But shortly after ‘Fantasy’ had charted, Nat and Nic published their autobiography, ‘Together’, which lifted the lid on and finally let them have their say on the whole circus that All Saints had become by it’s end. Speaking on Jonathan Ross’ chat show in 2006 as All Saints returned, Nicole said: ‘Sometimes you regret the things you said and think “Oh I wish I hadn’t done that” … But we were angry. And all the frustration that was built up came out in the book.’

A hugely disproportionate press fuelled backlash for some of its revelations on their time in All Saints saw to it that the album was pushed back for release until February 2003 to let the storm die down. And the signing of Girls Aloud to Polydor, then newly launched from Popstars: The Rivals, signalled the retitling of the album to it’s final name of ‘Everything’s Eventual’ (shared with Natalie’s favourite Stephen King novel, no less).

Next out the blocks for their second single came ‘Don’t Worry’. A haunting, part acoustic torch ballad about the passing from one existence to another (‘Don’t worry cause I’ll always be there for you, in the heavens above), and clocking in at nearly five minutes, it was well recieved at UK radio, at once reasserting their credible pop sensibilities and the source of their public stature, and it duly gave them a second top 5 hit. And the reviews for the album upon release were one of universal surprise. Even the usually dismissive and serious Q magazine awarded it 4 out of 5, declaring it a ‘sneakily fine record’.

Not for nothing was this praise being awarded. A pleasant and unique cocktail of ambient electronic sounds to rival Air for lushness, with clattering beats and crunching contemporary guitars that stood proudly next to the likes of Natalie Imbruglia and Alanis Morissette, the album boasted some truly magical pop gems, like bright and breezy singles-that-never-were ‘Hallelujah‘ and ‘Supernaturally‘, the truly bonkers, part rapped music set monologue ‘MWA‘ (an acronym for ‘Mystic Wisdom of the Ancients’, in case you’re wondering), and genuinely spell binding slower numbers like ‘5am‘ and ‘Anyone‘.

The album peaked at #9 following rounds of strong promo and the airing of their BBC fly-on-the-wall documentary, ‘Appleton On Appleton‘ (worth a watch on YouTube even now), selling a respectable 60,000 copies in it’s first few weeks on sale. Alas, in early 2003, with record sales industry wide plummeting in that weird time between physical formats falling out of fashion and digital downloads becoming the norm, squeezing label budgets to their very margins, this put pressure on many – and Appleton weren’t out this equation by any means.

‘Everything Eventually’ – originally titled ‘The Day Before’, as it was written by Nat and Nic around the time of the 9/11 terror attacks – was a quirky yet laidback and sumptuous number on the album, about the simplicity of day to day life and not taking it for granted, combining the earthiness of ‘Ray of Light’ era Madonna with the more ethereal tones of Enya.

Also clocking in at five minutes on the album, in many ways, it was ahead of its time, pre-dating the peppy yet conversational, kitchen sink pop that the likes of Lily Allen and Kate Nash were pushing three years later (‘Let’s go fishing down the river / Let’s go fly a kite on Primrose Hill’). A more condensed commercial mix of the track became the album’s third single in July, a whole six months after the album’s release, and just as they performed at festivals ranging from Oxegen to T in the Park.

But it struggled for airplay, and the same tabloid press that had dragged them before howled with gales of laughter at the simple nature of the single’s lyrics. And with the pop industry at that time growing increasingly unkind to former members of hugely successful pop bands – unless their last names were Timberlake or Knowles – the single’s failure to even reach the top 30 (it conked out at #38) was the straw that broke the camel, or rather Polydor’s back, who cut short the Appleton project before it even truly got going.

Of course, in the fifteen years since, All Saints have forgiven, forgotten, reconvened and given us not one but two truly awesome comebacks and albums in 2006’s ‘Studio 1’ and 2016’s ‘Red Flag’ – with a fifth studio album on its way later this year. And fifteen years on, Nat and Nic’s one and only album is as bold and exciting for me now as it was back then. Misunderstood by many, but for the 60,000+ (present writer included) who invested in a copy, ‘Everything’s Eventual’ is a worthy extension of their place in pop and girl group history.

One thought on “Nicole and Natalie: from All Saints to Appleton – ‘Everything’s Eventual’ at 15”