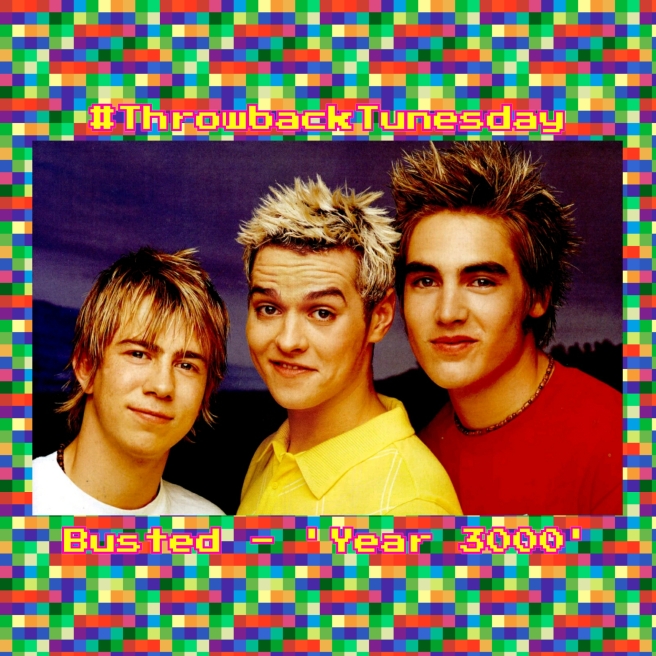 It’s Tuesday, which means it’s time for us once again to throw it back with #ThrowbackTunesday – our weekly blog and Spotify playlist with five songs that were huge hits on the UK charts at five points in the last 25 years this week.

Shall we see which songs we’re throwing back to this week, then? Oh, go on then…

It sometimes can take a couple of singles before a new pop band really gets on the road to mega stardom. Such was the case for the Busted lads 15 years ago this week, in January 2003.

They had already hit the top 3 in September 2002 with first single ‘What I Go To School For’, but their self titled debut album had only sold a few thousand copies by this point. It wasn’t until the release of its second single, however, that it started selling by the truckload – in turn, catapaulting them to huge success and fan hysteria unseen for a pop band with guitars before.

Taking its pop culture cues from ‘Back to the Future’, ‘Year 3000’ just missed out on topping the charts – the first winner of the BBC’s Fame Academy, David Sneddon, beat them to it with the schmaltz ridden and largely forgotten ‘Stop Living the Lie’ – but with its super catchy chorus, bouncy punk pop stylings and a super hilarious video, it lost the battle but won the war, so to speak.

‘Year 3000′ was one of the 00s’ first pop singles to cross over and become an instant modern classic. And as 2003 proved to be quite a big year for Matt, James and Charlie, I’ve a feeling we’ll meet them a bit more in this series of blogs over the course of 2018…