Welcome back one and all to the second part of this weekend’s #StrictlyLiveBlogging. With 24 hours now passed since the most recent live show of the BBC’s Strictly Come Dancing, and Blackpool now just six days away, another celebrity and their professional partner’s dream of hitting the famous Tower Ballroom is about to be shattered – but who will it be?

We’ll get going at 6:35pm with a look back at last night’s action and a look ahead to tonight’s dance off, before we go live with the results show on BBC One at 7:20pm. Don’t forget to swipe down or press F5 to refresh for all the dance off news as it breaks, and to leave your comments below or Tweet us using the hashtag #StrictlyLiveBlogging. Hope you can join us!

Evening everyone! So last night, the nine remaining couples danced again in their last bid to reach the Tower Ballroom for Blackpool week next week.

Davood and Nadiya had their best week yet as two 10s and two 9s put them top of the leaderboard with a total of 38 for their ‘Lambeth Walk’ inspired Charleston. Alexandra and Gorka were just behind them, also on 38 for the first Argentine Tango of the series. 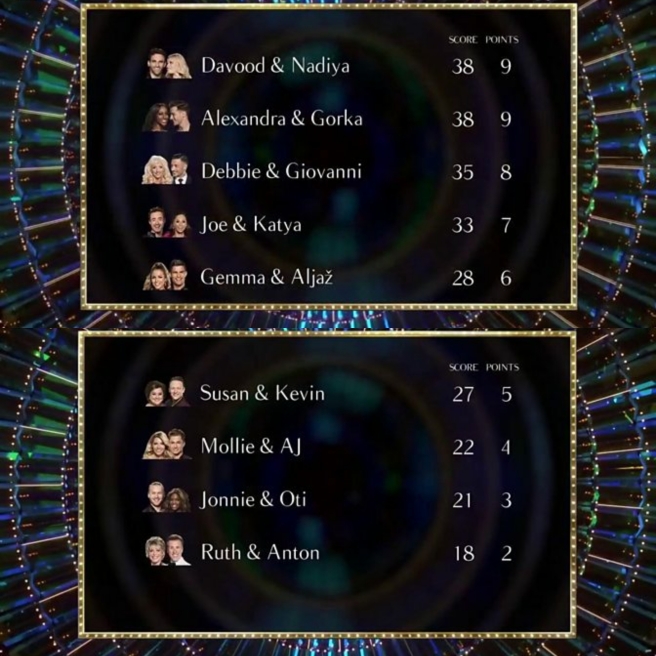 Jonnie and Oti’s unfairly undermarked Foxtrot saw them score a total of 21 and accusations of being dull from Craig – although they were saved from being right at the bottom thanks to Ruth and Anton’s equally poorly received Foxtrot, who scored a total of 18.

Tonight, with the judges’ scores and viewer votes combined, two couples will dance for their place in Blackpool once again in the dance off, and by the end of tonight, nine couples will become eight.

Also on the show tonight, there’s a special group dance from the professionals to mark Remembrance Sunday…

…and soul singing legend Seal will be performing a track from his latest album live in the studio.

Tonight's show is a real bobby dazzler – and @Seal's joining us for a sing song! ✨ @BBCOne, 7.20pm #Strictly pic.twitter.com/Z0XHofZpyp

30 minutes to go! Time for our weekly flashback to dances from Strictly Week 8s past. First up tonight from 2010, and to get us in the Blackpool mood for next week, it’s Matt Baker and Aliona Vilani with their Samba…

25 minutes to go! Our next flashback takes us back to 2012 now – it’s Kimberley Walsh and Pasha Kovalev’s sizzling Tango to a Prince classic…

20 minutes to go! Our third and final flashback this week is another Aliona Vilani routine – this time her Foxtrot with Jay McGuinness in 2015…

15 minutes to go! This Friday is the BBC’s annual Children in Need appeal, and current reigning Strictly champ Ore Oduba is going to be performing – singing and dancing – a classic Gene Kelly number on the live telethon. He’ll be on at 11pm on Friday, 17th November on BBC One so make sure you don’t miss it!

‪Getting goosebumps about performing live on @BBCCiN next Friday night 😬 buzzing for rehearsals this week, can't wait for you all to see it!!! Thank you for your support so far, it really means a lot 🙏 And still time for you to #DoYourThing too and help change kids' lives 🐻 #Pudsey #ChildreninNeed‬

There’ll also be a Strictly Children in Need special at 8pm, with six former presenters of legendary British children’s programme Blue Peter including Tim Vincent, Diane Louise Jordan and Konnie Huq dancing with some of the pros!

Here's something we made earlier… 😉 presenting the line-up for our Blue Peter @BBCCiN #Strictly special! pic.twitter.com/5BSo3EHE5k

Karen looks so beautiful here. Can tell this is going to be a very emotive dance!

Absolutely beautiful tribute to remember those who sacrificed so much for the freedoms we enjoy today. Best group dance so far this series. 👏👏👏👏

#LestWeForget a powerful and touching #RememberanceSunday routine from our Pros. #Strictly pic.twitter.com/uujbWkCY97

I think after last week it’s hard to call who’s going I think. I have a feeling Ruth will be in the dance off mind – what do you think?

And now the first couple in tonight’s dance off…

It’s Jonnie and Oti! Not deserved at all to be honest…

The red light shines on Jonnie and Oti tonight. They're in the Dance Off. 😒 #Strictly pic.twitter.com/zxwrky1Bmu

Time now for a live performance from Brit soul legend Seal, with his new single ‘Autumn Leaves’ from his latest album ‘Standards’. Do love Seal. Beautiful voice! Gorgeous routine from Anton and Nadiya as well!

Love coming back for Strictly. I’ll be performing a track from #Standards along with Anton and Nadiya https://t.co/fNsPb2tAn6

Which means Ruth and Anton are in the dance off…think we all know who’s going home now!

Red light alert 🚨 Ruth and Anton are in the Dance Off. #Strictly pic.twitter.com/erUGRaLauQ

It’s dance off time. Ruth and Anton are dancing first again with their Foxtrot…here we go…the hat and cane-ography aren’t as good as last night. Yep. It’s a dead cert who’s going.

Jonnie and Oti are up next to dance again with their Foxtrot. There was nothing wrong with this last night, nothing wrong tonight either. Stupid Craig and Shirley putting them here. Hmmph.

Which means Ruth and Anton are out of Strictly Come Dancing 2017. Time for a group bundle!

That’s it for another weekend of #StrictlyLiveBlogging – we’ll see you next week for the excursion to the Mecca of ballroom that is Blackpool. In the meantime…keeeeep dancing and live blogging!