Welcome to a suitably spooky DeLorean ride for Halloween on this week’s #BlastfromthePast. This week, we hop on our broomsticks to 1986, when the then 11 year old Fairuza Balk (Return to Oz, The Craft) took up the role of one of Britain’s best loved witches.

Originally airing on ITV in October of that year, The Worst Witch had started life some ten years before as the first in a series of bestselling novels by popular children’s author Jill Murphy. This feature length adaptation of the first book in the series was to be the first of three TV adaptations – including a long running series in 1998, and now a new version of the show on CBBC and Netflix in 2017 – but arguably, in my view, one of its best.

For those unfamiliar with the series, The Worst Witch follows the misadventures of Mildred Hubble, a witch-in-training at Miss Cackle’s Academy for Witches (St Michael’s College in Tenbury doubling up as the academy for this adaptation) who means well but frequently gets everything wrong, leading to her being dubbed the worst witch in the entire academy.

Her best friend Maud Warlock is often along for her misadventures, but matters aren’t usually helped by the fact that her frosty form mistress, Miss Hardbroom, is always on her case, as is teacher’s pet and vindictive goody goody, Ethel Hallow. The events of the first book and the 1986 film chronicle Mildred’s first term at the academy, with laughter potions going wrong, pupils being turned into pigs, a broomstick formation display at the Halloween ceremony going spectacularly tits up, and Miss Cackle’s wicked twin sister Agatha, and her coven of cronies, plotting to take over the entire school and turn everyone into toads. 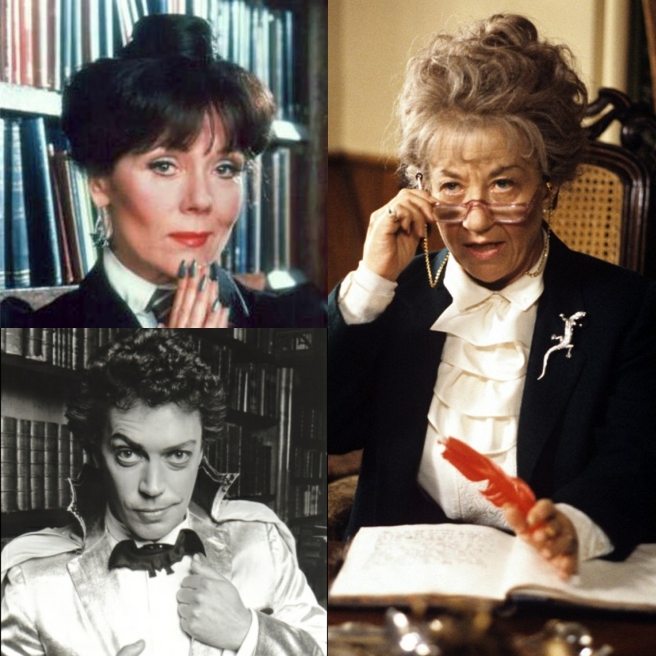 The 1986 version finds Balk in the role of Mildred Hubble, with The Avengers star Diana Rigg in the role of a dramatic and comically camp Miss Hardbroom, whilst Charlotte Rae takes on both Miss Cackle and Agatha, and the Sweet Transvestite himself, Tim Curry, plays the Grand Wizard.

This adaptation wasn’t met in high regard by Jill Murphy herself, but so many elements to this film make this entertaining and compulsive viewing for me every Halloween, including, but not limited to:

But more than anything, I greatly identified with the character of Mildred Hubble. Growing up, as the title song says, isn’t easy, and everyone can identify, through the medium of a fantasy, magical witches’ academy, the themes of being bullied, not being great academically, and just generally trying to find your place in the world with the best of intentions.

The full 1986 film is on YouTube thankfully, and is well worth a watch after a round of trick or treating this weekend. Charmingly shoddy and retro, but bewitching all the same.