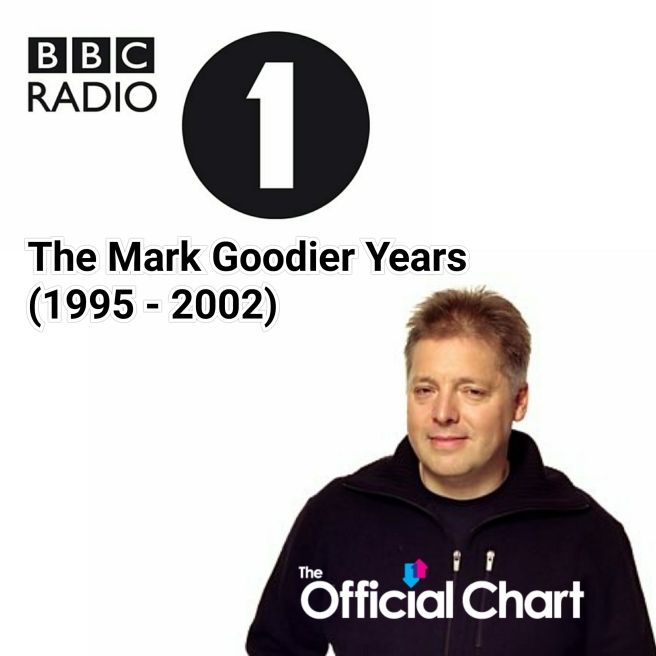 This week’s blogging DeLorean hop comes via the recent celebrations that it’s 50 years since the BBC Light Programme on the radio was split into two new stations: Radio 1, for a younger audience and Radio 2 for an older one.

As part of these celebrations, weekend before last saw the broadcast on digital radio and iPlayer of Radio 1 Vintage, three days of retrospective programming covering a wealth of highlights, including original breakfast DJ Tony Blackburn hosting a breakfast show with current Radio 1 host Nick Grimshaw, and Steve Lamacq and Jo Whiley reunited for a look back at their Evening Session show.

But of course, no retrospective lineup of Radio 1 would have been complete without a look back at probably it’s most widely recognised show: The Official Chart. Hosted by the show’s current host Greg James, he was joined by the show’s longest serving host of that slot by far – Mark Goodier. Having joined Radio 1 in 1987, on aggregate he spent about 10 years counting backwards from 40-1, but it was from 1995 onwards that he did it full time.

Mark’s reappearance also meant that it allowed for this bit of radio gold – both he and Greg counting down that week’s top 40 using the old jingle package from the 90s. And as Popjustice rightly pointed out on Twitter – he’s still got it, hasn’t he?

I said myself on Twitter that even listening to that familiar voice, that was such a huge part of my early pop music loving DNA and childhood Sunday afternoons, and hearing him say things like ‘Down 4 at number 9, CNCO and Little Mix with Reggaton Lento’ elicited some kind of Pavlovian/nostalgic desire to huddle round my radio as if I were 7 again. Because that’s how old I was when I started listening to the Official Chart. In fact, in the YouTube playlist I compiled for today’s blog, the rundown from the very first one I remember listening to is preserved here: 28th April 1996.

By this point, Mark had been doing it for a year, having taken over from Bruno Brookes. It was an interesting moment in time to start following the charts, even as a 7 year old. Take That had just split up, but the Spice Girls were still a few months away from launch, and the likes of Oasis, the Manic Street Preachers and the Bluetones were flying the Britpop flag high, whilst George Michael (then on his ‘Older’ era of his career) and Gina G’s Eurovision smash were top of the charts. Suddenly I was being exposed to this huge variety of music from all genres in a three hour timeslot, far beyond anything in my parents or sisters’ record collections.

It was to be another year – as already documented in this blog – before I became a singles buyer myself full time, and thus started contributing to the weekly singles countdown without even realising (yes, it did take me that long to work out that a visit to Woolworths did result in what happened on the chart that week). But by this point, Sunday afternoons from 4-7pm were entirely my own time, huddled round the nearest mini system I could find to ensure I was tuned in to find out who was number one – and who wasn’t.

Mark’s style of hosting was the one to beat – professional and consummate, a mix of excitement and avuncular, but never at the expense of the records. One of several features his hosting of the show bought in was the sourcing of chart stats from Alan Jones’ weekly commentary for industry bible Music Week.

This was particularly useful for historic chart moments like in March 2001, when Hear’Say, the (short lived) winners of the first ever series of Popstars, learned in a simulcast of the show with ITV that they had scored the fastest selling debut single ever with sales of over half a million copies of debut hit ‘Pure & Simple’ in its first week on sale alone.

If the opportunity was there, Mark would also talk to the act behind that week’s number one single on the phone before their record got played to the nation as the UK’s new chart topper – in my playlist above, there’s a particularly lovely instance of this with Melanie C, on discovering she’d hit number one as a solo artist for a second time with ‘I Turn to You’.

Mark was host at a time when single sales were at an all time high, with a regular turnover of number ones. In 2000, there was 43 to be exact, a record that still hasn’t been topped to this day. But as the 90s gave way to the 00s, new technologies were emerging that would change the way music would be consumed by the majority forever. Single sales and interest in the charts began to take a direct hit as a result.

You can even hear the mild fatigue in Mark’s voice in a clip I’ve included in my playlist from about September 2001, when he realises he’s having to introduce Bob the Builder as the nation’s favourite that week, saying that it had become a ‘news programme with music’. Something was going to have to give, clearly.

In previous years, he’d had his own weekend show, as well as hosting the Breakfast Show and the Evening Session at various points. By this time however, the Official Chart was the only show he was tied to. Mark’s final show came just as the Official Chart celebrated 50 years, on 17th November 2002.

I remember his last show fondly, and it felt like an end of an era for me at that time. My listening to Radio 1’s weekly rundown became less and less after that as the years wore on – only really bothering to tune in when an artist I liked or cared about was charting. Not to mention that the format of the show changed beyond all recognition of what I’d grown up with, as it became increasingly less and less about the chart and more about pumping it with irrelevant rubbish like celebrity gossip and DVD charts, and hosted by a succession of DJs for whom the chart was entirely an afterthought.

In fact, in the fifteen years since Mark left the show, Greg James is probably the one DJ who has been closest to his style of hosting it, even with the reduced timeslot on Friday afternoons from 4-6pm that the top 40 now occupies in the Radio 1 schedule. So it seems quite fitting then, that they hosted the Radio 1 Vintage show together. It was a bit like the passing of a baton to another in radio – and pop music – form.

Here’s then, to Mr Goodier. The fastest and most accurate host of a unique slot of music radio broadcasting.

The Official Chart ‘best of’ show with Greg James and Mark Goodier on Radio 1 Vintage is available to listen to again on BBC iPlayer Radio until 31st October.