It’s not unfair to say that, where my love of 90s music – and in particular its pop groups – are concerned, that for all their ability to sell concert tickets and records by the truckload c. 1997 – 2001, I was never on board with Steps as much as I was with say, S Club 7. Sure, I made sure I knew their dance routines down pat for school discos – hello to you, the million selling, chart topping cover of the Bee Gees’ “Tragedy” in 1998 with that ‘hands to the side of the head’ move.

And whilst they did release really great singles more often than not – ‘One for Sorrow’, ‘Deeper Shade of Blue’ and ‘It’s The Way You Make Me Feel’ being the three finest examples of their singles canon, and of pop done properly – not one of their first three albums found its way onto 9 year old me’s stereo system. They were very much what-I-call a ‘singles band’. Simply put, I was invested as far as I could be invested. Not to mention I always found Ian ‘H’ Watkins a bit annoying, but then again so did most people my age.

The wheels for their comeback set in motion six years ago, when their former label Sony announced they were releasing ‘The Ultimate Collection’ album – essentially the same album as their 2001 best of ‘Gold: Greatest Hits’ – with or without them. 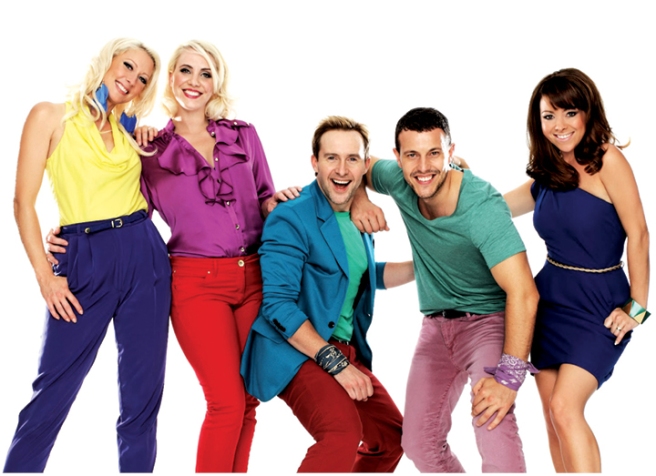 Cue Sky Living venturing up the opportunity for them to reform for a four part series titled ‘Steps Reunion’, officially one of the greatest bits of pop telly in the last 10 years, if not for inventing the Twitter drinking game ‘#DrinkWhenStepsCry’ (for most instances of which Lisa Scott-Lee was responsible), and a comeback tour. Cue the album shooting to number one and the tour being a sellout, yadda yadda yadda.

Then came a barely noticeable or remembered Christmas-y themed covers album ‘Light Up the World’ which passed without notice in 2012, and then all fell silent again. Until this year, a whole two decades since they first line danced into our consciousness with ‘5-6-7-8′. It seemed only right that this 20th anniversary was celebrated with new material – and the inevitable tour – of some form.

Heralded by Peter Loraine – he of course being the brains behind All Saints’ comeback album ‘Red Flag’ last year, Bananarama’s upcoming reunion tour, as well as the careers of Girls Aloud, The Saturdays and numerous other amazing pop people – ‘Tears on the Dancefloor’ is their fourth studio album of original material, and first since 2000’s ‘Buzz’. And just like that, Steps have released and found success as an ‘albums band’ as well as a singles one.

It helps that they’ve set themselves high standards from the off with all the singles that have come from the album thus far. ‘Scared of the Dark’, which knocked Ed Sheeran off the top of the iTunes chart back in March is exactly what you’d expect a Steps single in 2017 to sound like, but in the best possible way. It’s all dramatic strings and production with an epic chorus that’s up there with the likes of ‘Last Thing On My Mind’.

In fact, much of the album is set firmly towards four to the floor disco pop bangers, like the title track, ‘Firefly’ and ‘Glitter and Gold’. ‘You Make Me Whole’ even finds time to tap into a bit of a Rihanna with Calvin Harris sort of vibe with its calypso-esque backing, whilst current single ‘Neon Blue’ is all quiet and reflective with a soft piano backing before exploding into a monster of a floorfiller that’ll have you partying like it’s 1999 all over again.

But right in the middle of the album is a song that I suspect will be to Steps in years to come, what ‘Patience’ and ‘Rule the World’ were to Take That – aka the confirmation of their pop majesty to any doubters present, and of a pop act at the height of their musical potency. Their last single in June, ‘Story of a Heart’ is, as has been noted elsewhere already, the work of two men from the band that Steps were considered mutual bedfellows with in their first phase of success, namely Bjorn and Benny from Abba.

Originally recorded by Benny Andersson’s orchestra, and released in 2009, it was a song that I remember saying in a review of it that I wrote for a music website at the time would, if it ever happened, be the perfect comeback single for Steps. Eight years on, and happily that has proved to be the case. To paraphrase the famous beer advert at the time of their 90s success, if Carlsberg did wistful, moving Scandopop belters, they’d sound like this. It’s a real work of class.

In fact, dare I say it as an S Club fan, but this puts the S Clubbers’ 2015 reunion of one briefly reactivated hits album and a barely commited tour in the shade somewhat. Steps have delivered by honing to perfection all of what they really did best, and the strength and depth of ‘Tears on the Dancefloor’ really shines through with repeated listens. Better best forgotten? Definitely not with tunes like these – you’ll be stomping all night.

STREAM THESE: ‘Story of a Heart’, ‘Firefly’, ‘Glitter and Gold’, ‘You Make Me Whole’

‘Tears on the Dancefloor’ is out now via Steps Music/Absolute. Steps’ new UK and Ireland tour “Party on the Dancefloor” (with support from Vengaboys) starts at the SSE Arena in Belfast on 12th November, and finishes up at Cardiff Motorpoint Arena on 7th December – tickets are on sale now. Twitter: @OfficialSteps