Apologies for no weekly hop in my blogging DeLorean otherwise known as #BlastfromthePast last week – partly because I had my special blog I wot wrote for my sister’s 30th birthday to get up.

All is back to normal though you’ll be glad to hear. This week, it’s time to celebrate a true legend of British stage and screen…

Ask most people who grew up watching kids TV in the 70s, 80s – heck even a bit of the 90s – to name a few presenters/voices they recall, chances are this man would be chief amongst them – and to my delight, I discovered was on Twitter this week. Starting out as a primary school teacher, Woking born Derek Griffiths is a quadruple threat in a world of triples: actor, singer, multi instrumentalist and mime artist.

It was this set of talents that landed him the gig on the BBC’s Play School, and later Play Away, which saw him work with the late Brian Cant, as well as Chloe Ashcroft and Johnny Ball. His work on this led to more projects with the Beeb, including Heads and Tails – a wildlife/nature show with his zany narration and music accompanying it – something he’d do again for modern young audiences on the Channel 5 series Animal Antics in the early 00s. 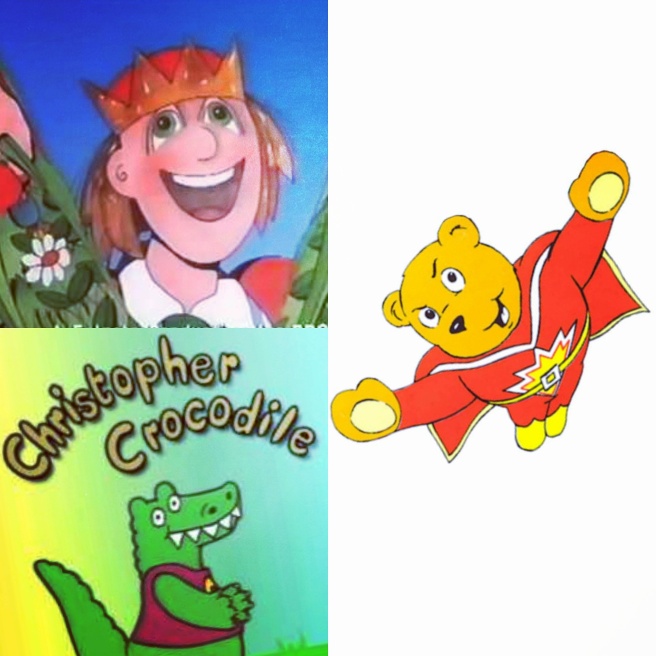 He also voiced three animated series for the BBC that I remember fondly from my youth (pictured above, from top left) – King Greenfingers, Christopher Crocodile (from which I gained my sisters’ nickname for me of Crocodilious), and perhaps best known of all, SuperTed. He also made the move after Play School to ITV, where he hosted Film Fun, a series of amusing continuity links set in an old style cinema between assorted Looney Tunes cartoons.

He was also a regular guest feature on various comedy and light entertainment shows, including (but not limited to) Terry and June, Till Death Do Us Part, Blankety Blank and Don’t Ask Me. He also did a notable public ad campaign in the 80s promoting the awareness of bike theft (this along with several other fine works of his can be found in my YouTube playlist below).

Following West End turns in the likes of Chitty Chitty Bang Bang and Beauty and the Beast, Derek recently cropped up on the nation’s favourite soap, Coronation Street, playing retired mechanic Freddie – a role he left in March this year to star in another new theatre role, this time in Driving Miss Daisy which is currently touring the UK.

Now he’s also campaigning for a reunion of the Play School cast – before, he says, “we all go senile”. Here’s then, to this week’s #BlastfromthePast, Derek Griffiths. A Jack of all trades, but a master of all of them.