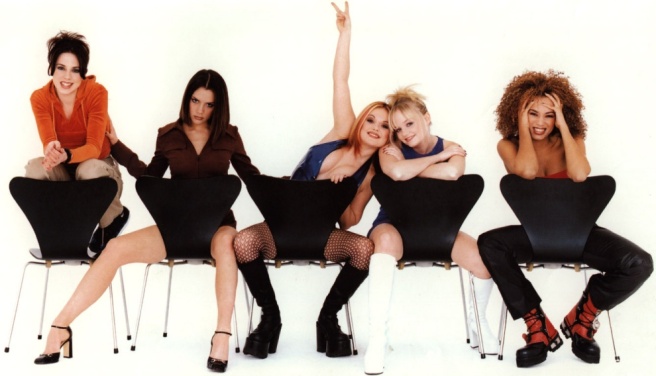 Picture the scene exactly 20 years ago, in July 1996. Pop has never mattered the least in such a long time. Take That have split, and neither Gary Barlow nor Robbie Williams are yet emerging with viable solo prospects. Oasis and Blur, the two heavyweights of Britpop, are the main games in town. And Peter Andre is flashing his giant man chest all over the shop in the video for ‘Mysterious Girl’. Hardly cause for celebration, is it? But behold, what is plastered across the back of that fortnight’s copy of the much loved pop bible, Smash Hits: 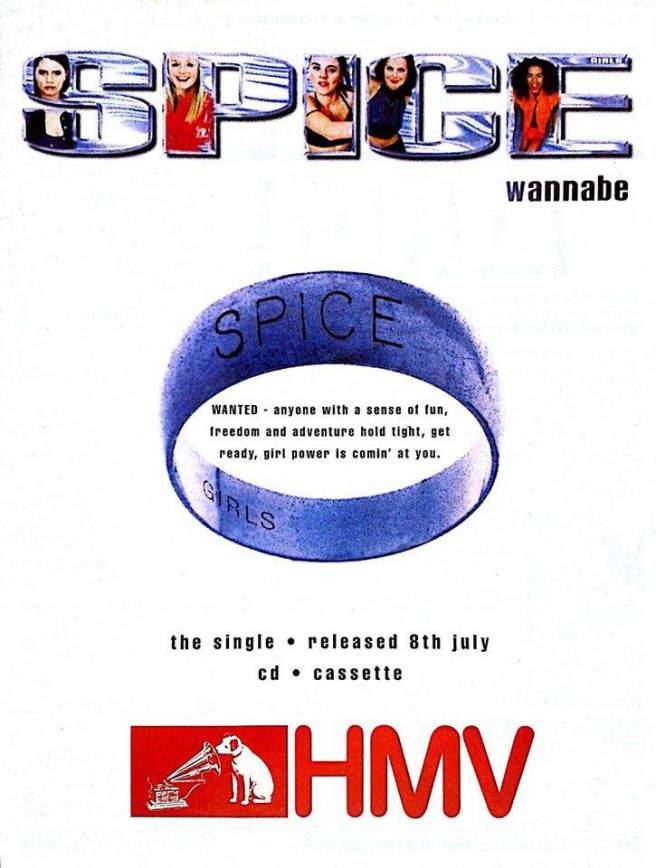 And girl power, did well, come at us. And not just at the UK, but the rest of the world too. In the 90s, the Spice Girls became an unstoppable force, as Ginger, Posh, Baby, Sporty and Scary stomped their way to worldwide domination, with number one hits on every continent (including nine in the UK – a record for a girl group), record sales of over 50 million, BRITs and MTV awards, a smash box office movie, sponsorship deals aplenty and America conquered into the bargain too. They achieved more in their short time together than most bands manage in 10 years, with some of the most glorious, unapologetic pop music since ABBA, delivered with a sisterly touch.

Now, as today marks the 20th anniversary of the release of their debut single that started it all, and with ‘Spiceworld: The Exhibition’ curated by fan and Guinness World Record holding artist Liz West on my agenda to visit this month at Watford Coliseum, today I begin a two part look back at their incredible legacy on pop with two specially curated Spotify playlists from myself, as we celebrate the music of five normal, loud and in-yer-face girls who taught the world how to zig-a-zig-aah…

Well, I couldn’t not start this playlist without it, could I? Not before or since (with the possible exception of Girls Aloud’s “Sound of the Underground”) has there been a more arresting, manifesto setting debut single from a girl group. Written by the girls in half an hour with Richard Stannard and Matt Rowe, who would go onto write and produce this and many of their biggest hits, when they signed with Virgin Records in late 1995, they were absolutely adamant it had to be their first single. Executives weren’t convinced, but took the gamble nonetheless, and complete with a madcap, unscripted video, seeing them gatecrash a bohemian party at St Pancra’s Grand Hotel in London, the world instantly wanted to be their lover and get with their friends.

Even for all its worldwide chart trajectories, sales and ubiquity, ‘Wannabe’ was one of those records that could very easily have been a one hit wonder in a year, and indeed decade, full of them – ‘Macarena’, anyone? Exactly – but ‘Say You’ll Be There’ proved that the lightning bolt struck twice. A cool but cute R&B styled pop gem, coupled with a visually impressive video set in the Mojave desert with the girls re-imagined as space vixen B-movie characters a la ‘Faster Pussycat! Kill! Kill!’, it too flew to number one upon release in October 1996 and established the Spices as bonafide pop giants.

If there’s one type of single that the Spice Girls were always surprisingly really good at, it was their slower numbers, and this, their first of three consecutive Christmas chart toppers, was the finest example in their canon. Crisp, heart warming production and stunning vocal turns from all the girls – but in particular Emma Bunton, who shines the brightest of all in her pre-chorus verses on this single – even now when December rolls around, it doesn’t feel like December until we’ve heard the girls seductively crooning ‘Wanna make love to ya baby’…

I remember clearly two days in 1998 – one of which we’ll get onto in a second, but this being the other. Namely, the Sunday when Mark Goodier was running down the new top 40 on BBC Radio 1, and the shock amongst all that the Spices had, for the first time in seven single releases, failed to make the UK number one spot (the record that did beat them, a hard hitting dance rework of Run DMC’s “It’s Like That” by top DJ Jason Nevins, went onto spend 6 weeks at the top and sell over a million copies). Shame then, that this misfortune happened to easily one of their best singles for me. Complete with an iconic hand jive dance routine mimicked at school discos for the rest of the years following, “Stop” was an endearing and catchy pastiche of Motown flavoured pop, right down to the Supremes inspired ad libs on the second verse.

So the other memorable day from 1998? Ah yes, that would be 31st May, when, following a no-show appearance at the Helsinki date of their world tour and the BBC National Lottery show, Geri Halliwell had announced that she was packing up Ginger’s platform shoes and walking away from the group that made her a household name. What followed with almost impeccable timing, as the remaining four girls continued their world tour around the arenas and stadiums of America over the summer of that year, was a genuinely moving and heartbreaking, almost “Bright Eyes” esque ode to a fleeting Mediterranean romance, and indeed, to a Ginger snapping away from the Spice.